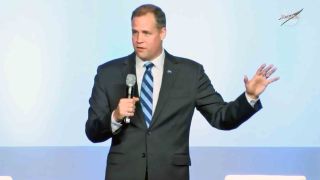 ATLANTA — Over the last few years, the United States has declared its intention to once again put boots on the moon. That sort of exploration comes with a giant price tag, leaving some to wonder where the money will come from.

On Wednesday (July 31), NASA Administrator Jim Bridenstine announced that money for the development and testing of a lunar lander would not come out of NASA's existing budget for running the International Space Station (ISS), nor would it be taken from the space agency's science budget.

"Going to the moon is not cheap," Bridenstine told a crowd of over 800 people here at the annual International Space Station Research and Development Conference in Atlanta. "If you cannibalize science, if you cannibalize the ISS, you will never achieve the end state you desire." This came after President Donald Trump's original 2019 budget proposed cutting funding for the space station to improve lunar exploration.

Bridenstine went on to say that an amendment to the 2020 budget request for an additional $1.6 billion appears to have been successful. "We got the money and it didn't come from any part of NASA."

The largest chunk of that money, $1 billion, would go toward the development of one or more human-rated landers capable of touching down on the lunar surface. "You can't get to the moon without a lander," Bridenstine said. Developing a lunar lander would eventually help in the development of a lander for the Red Planet, though the two bodies have different atmospheres.

Citing bipartisan support, Bridenstine said that the budget discussions appeared to be going well with the House and Senate.

The close of the 2020 budget won't end the financial struggles of lunar exploration. The administrator stressed that, because research and development costs tend to follow a bell curve, the request for 2021 would be higher. The development of the Lunar Orbital Platform-Gateway, which will orbit the moon and give astronauts a location to live and work near the lunar surface, will also take an increased amount of money. "We still have to move forward in getting Congress on board," he said.

One of the major reasons for preserving the ISS's budget is that the station produces remarkable scientific insights. Research on the station does far more than further human exploration of space. ISS projects investigate human health, agriculture and carbon emissions. And that's why Bridenstine is working to prevent lunar exploration from swallowing up that part of the national budget.

"What's happening inside the International Space Station has the potential to transform — it is transforming — lives on Earth," he said.

Other speakers at the conference addressed medical research that is currently being conducted onboard the station. Under the unique effects of microgravity, cells can live longer, allowing for more-thorough testing of medical procedures and treatments. Experiments involving cancer, Alzheimer's and muscular dystrophy, among many other conditions, have flown on the space station, helping researchers fight these diseases.

Experiments on the outside of the space station can monitor Earth. The Ecosystem Spaceborne Thermal Radiometer Experiment on Space Station (ECOSTRESS) measures the temperatures of plants, which rise when those organisms need more water. "Looking at the Earth from the ISS, we can see the stress on the plants weeks ahead of time [before a drought]," Bridenstine said. "We can get in front of a drought rather than responding to it."

Bridenstine also pointed to results from the Flame Extinguishment Experiment (FLEX), designed to assess the effectiveness of fire suppressants in microgravity. According to the administrator, FLEX revealed that combustion occurs under cooler conditions in space. Because most vehicles require a combustion engine, the discovery "could actually transform combustion on Earth and reduce carbon dioxide emissions.

"The reality is that we can do things in space that we can't do on Earth," Bridenstine said. "We've seen some very promising technology and capabilities that have the opportunities to change lives on Earth."