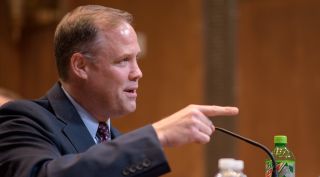 WASHINGTON — NASA Administrator Jim Bridenstine said the administration's request to add $1.6 billion to the agency's 2020 budget to start work on the Artemis lunar program was not "dead on arrival" despite a lack of action on it by House appropriators.

Speaking at a NASA Advisory Council meeting May 30, Bridenstine argued that the budget amendment, a down payment on the overall, but undefined, cost of returning astronauts to the moon by 2024, had bipartisan support but arrived too late for House appropriators to consider in their bill.

"We got that out the door the same week that the House Appropriations Committee was marking up their bill for NASA," he said. "So people said that they rejected our proposal. I want to be clear: that is not necessarily what that means."

The administration released its budget amendment May 13. House appropriators released their proposed commerce, justice and science (CJS) bill May 16, which was ultimately favorably reported without significant changes by the full committee May 22. That bill did not incorporate the amended budget, and members of the committee did not reject or otherwise discuss the amendment during their markup of the bill.

"The idea that they were going to incorporate 1.6 billion new dollars" for NASA's plans on such short notice, Bridenstine said, "is just not realistic."

He added that he's had positive conversations with House members of both parties about Artemis. "Don't get me wrong: there are people that have questions or people who have concerns, people who are interested in where the money is coming from," he said. "I think, in general, there's a lot of bipartisan support for an accelerated effort to get to the moon with kind of a new energy."

Related: NASA Has a Full Plate of Moon Missions Before Astronauts Go Back

He looked instead to the Senate to consider the budget amendment when it marks up its CJS bill in the coming weeks. He noted that Sen. Jerry Moran (R-Kan.), who chairs the Senate CJS appropriations subcommittee, tweeted May 15 that he planned to work with Bridenstine and the White House to "make certain NASA has the resources to land the first woman on the Moon and build lasting infrastructure to support missions to Mars and beyond."

Bridenstine suggested that Moran's support could lead to a Senate bill that might incorporate the budget amendment, a difference that would be hammered out in a conference committee of House and Senate appropriators. "It starts the political negotiation in conference for ultimately how the House and Senate resolve those differences," he said.

Such a conference committee is likely months away, given the recent history of the appropriations process. Bridenstine argued that it premature to say that the plan was dead because House appropriators declined to act on the budget amendment.

"This is the beginning of the path to the moon," he said, likening the process to a baseball game. "People have said we're in the second inning. I'm here to tell you I think we're in the top of the first inning."

Bridenstine had the support of one of the newest members of the council, former Sen. Bill Nelson. Bridenstine named Nelson to the council May 28, a sign that any acrimony regarding Bridenstine's bruising confirmation battle to be NASA administrator, whose opposition was led by Nelson, had passed.

"I'm honored that the administrator would ask me to come back and be a part of the NASA family," Nelson said in remarks at the meeting. Nelson, who served three terms in the Senate as a Democrat from Florida, lost his bid for a fourth term last November.

He alluded to that defeat, and the departure of other NASA advocates from Congress, in his speech. "A lot of the assets in Congress that you could call on in the past have retired," he said. That included former Sens. Kay Bailey Hutchison (R-Texas) and Barbara Mikulski (D-Md.) and Reps. John Culberson (R-Texas) and Lamar Smith (R-Texas).

"Now, fortunately, we still have Richard Shelby," he said, the Republican senator from Alabama who chairs the Senate Appropriations Committee and has supported NASA programs in the past, particularly the Space Launch System. Nelson said he expected Shelby to remain a "go-to" advocate for NASA for the remainder of his term, which runs through 2022.

Nelson, echoing comments he made while a senator, argued that NASA is still "not only a bipartisan agency, it is a nonpartisan agency." That, though, may not make Bridenstine's efforts to win funding for a return to the moon much easier.

"The administrator, really, has a Herculean task to now get the support," he said.