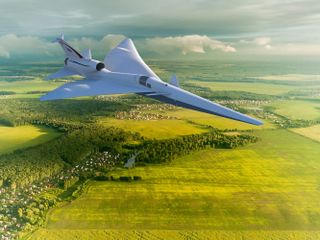 While the Trump administration's proposed NASA budget for 2021 includes a big boost for human spaceflight, it also would boost funding for the agency's aeronautics division

Included in the $25.2 billion budget request for NASA is $819 million for aeronautics research, up from $783 million in 2020. One of NASA's chief aeronautics programs is the experimental X-59 supersonic aircraft being built by Lockheed Martin to pioneer quieter sonic booms for commercial travel. NASA's budget documents released to date did not include the exact funding for the new jet, but the project is vital for the agency's aeronautics division.

"In aeronautics, the budget backs all our cutting-edge research on commercial use of supersonic aircraft, all-electric airplanes, and development of an unmanned aerial system that will make flying small drones safer and more efficient in the 21st century," NASA chief Jim Bridenstine said in a statement Monday (Feb. 10) as the budget was unveiled.

In the request, the agency continues its funding for the plane, dubbed the X-59 QueSST, for "Quiet Supersonic Transport," an experimental aircraft that is being designed and built to travel faster than the speed of sound while only creating "low booms," or ultra-quiet sonic booms. The X-plane is expected to make its debut flight in 2022.

The proposed budget "completes fabrication and testing of the Low Boom Flight Demonstrator in anticipation of its first flight in 2022, which will demonstrate quiet supersonic flight and pave the way for eventual over-land commercial supersonic flight," according to a NASA fact sheet.

Lockheed Martin is confident that they will be able to build the plane by the end of 2020, a representative from the company told Space.com. Lockheed is still working towards flying the experimental plane for the first time in 2021, while NASA's budget request states that the plane will make its first low-boom flight in Jan. 2022.

"We are still on track for first flight in 2021," Craig Nickol, NASA's Low Boom Flight Demonstrator project manager, told Space.com in an email. "NASA's first flight commitment date to external stakeholders is in early 2022, which includes schedule reserves, but we are still pursuing our work-to date in 2021."

A representative from Lockheed Martin explained to Space.com that, following the completion of the high-speed plane, the company will turn the plane over to NASA, who will complete a phase of testing to ensure everything is working correctly. After testing, NASA plans to test-fly the plane over selected regions to gauge the public's reaction to the sonic booms, which will ideally be as quiet as a sonic boom from an ultrafast experimental plane can be.

In the request, the agency explicitly states that they are proposing funding not only for the plane, but additionally for "Research to make air travel faster and cheaper and safely integrate drones into the nation’s airspace," NASA writes in the request. The budget also cites its support of aeronautics research "that contributes to the Nation's technological leadership and supports high-quality jobs."