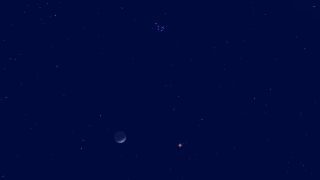 Watch the moon make a close approach to Mars above the western horizon after sunset on March 11. Just above the celestial pair, you can also spot the Pleiades star cluster.
(Image: © Starry Night software)

Look up tonight (March 11) after sunset to see Mars make a close approach to the crescent moon.

The two objects made their closest approach this morning when they were below the horizon for skywatchers in the U.S. The pair shared the same right ascension — the celestial equivalent of longitude — at 8:10 a.m. EDT (1210 GMT), as the 5-day-old moon passed about 5.5 degrees to the south of the Red Planet, according to the skywatching website In-The-Sky.org.

If you're in New York City, you'll be able to see the moon and Mars starting about 7:12 p.m. EDT. From NYC, the pair will become visible at 49 degrees above the southwestern horizon with Mars at 7 degrees to the right of the moon, or about one binocular field to the right of our natural satellite. The pair will be together in the sky as dusk fades into night until shortly before midnight. The pair will be resting in the constellation Aries the Ram, with the moon at magnitude -10.9 and Mars at magnitude 1.3.

Mars and the moon will be visible with the naked eye, but don't bother taking out the telescope or even a the binoculars for this conjunction tonight unless you want a closer look at the moon. The pair will be too far apart for fit within the field of view of either apparatus.

After the moon passes by Mars, the rocky satellite will continue to orbit Earth. By tomorrow (March 12), the moon will near the red star Aldebaran and the Pleiades star cluster, according to the skywatching website EarthSky.org. Both Aldebaran and Pleiades will be visible near the moon and Mars, resting in the constellation Taurus the Bull. Within Taurus, Aldebaran marks the Bull’s eye and Pleiades makes up the Bull's shoulder.

Since Mars takes about two years to orbit the sun, compared with Earth's one year, every other year Mars is a little bit brighter in the night sky. 2019 just so happens to be an off year, where Mars appears a bit dimmer. It's still visible, but it will not be as bright in the sky as Aldebaran. So, while both Mars and the "Bull's Eye" are both reddish in color, the star will be brighter than Mars, which will make it easy to separate the two.