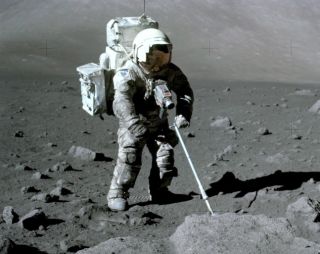 Think of it as a flashback message from the Apollo moonwalkers: The moon is a Disneyland of dust.

Between 1969 and the end of 1972, a dozen astronauts kicked up the powdery regolith, the topside dirt of the moon.

"The more time you spend there, the more you get covered from helmet to boots with lunar dust," recalled Apollo 11 astronaut Buzz Aldrin. Apollo 17 commander Gene Cernan expressed similar thoughts in a technical debrief following his mission, which was the last human sojourn to the moon. "I think dust is probably one of our greatest inhibitors to a nominal operation on the moon. I think we can overcome other physiological or physical or mechanical problems except dust," he said.

Apollo crewmembers could not avoid tracking lunar material inside their moon landers. After doffing their helmets and gloves, moonwalkers could feel the abrasive nature of the dust, as well as smell and even taste the moon. And that gave rise to the "Apollo aroma," astronaut recollections of the odor of the moon. Turns out, it has a distinctive smell.

Aldrin remembers that the lunar dust that soiled suits and equipment during the Apollo 11 mission smelled "like burnt charcoal or similar to the ashes that are in a fireplace, especially if you sprinkle a little water on them."

Apollo 17's Harrison "Jack" Schmitt has said, "All I can say is that everyone's instant impression of the smell was that of spent gunpowder, not that it was 'metallic' or 'acrid.' Spent gunpowder smell probably was much more implanted in our memories than other comparable smells." He first commented on the gunpowder scent just 7 minutes after the repressurization of the Apollo 17 lunar lander was initiated, Schmitt added.

Schmitt had what some tag as history's first recorded case of extraterrestrial hay fever. "It's come on pretty fast," he radioed from the moon to mission control in Houston in a congested voice. He had a significant reaction to moon dust, which caused the cartilage plates in the walls of his nasal chambers to swell.

Earth's moon is the  "go-to" place for human spaceflight over the next decade. There are substantial political, economic and financial reasons to explore and colonize lunar territory — in particular, to extract water from the moon's surface and to mine for precious rare-earth metals as terrestrial resources dwindle.

Though there will be opportunities for those willing to make use of those resources, whether as nations, as individuals, as private companies or as a combination of these, there will also be dangers to address. One such danger to astronauts will be from exposure to lunar dust.

That's the outlook of John Cain, a United Kingdom-based expert on the hazards of lunar dust exposure and an independent consultant on astronaut health risk management. He was the first scientist to define the scientific discipline of "astronautical hygiene," a branch of occupational medicine that aims to control astronaut exposure to hazards in a low-gravity environment.

"It is essential that the nature of the lunar dust is known, its effects on the body understood, the routes of exposure identified and the means to reduce exposure are developed," Cain told Space.com. Such work is being carried out in the U.K., the United States, the European Union, China, Russia and India.

"The location of the deposition of dust particles in the lungs will depend on the particle size, with nanoparticles penetrating deep into the lungs," Cain said. "The moon's lower gravity will have a significant impact on where the nanoparticles are deposited and the subsequent exposure health effects."

There are opportunities on the moon to investigate the exposure health effects to nanoparticles in a low-gravity environment, especially lung cellular responses, Cain said. Such research, together with other studies of dust exposure, will be invaluable for investigating health effects and for developing the measures to control exposure to dust on the moon, he added. These measures may include spacesuits with low dust retention, magnetic-separation techniques for the dust or particle beams to remove dust from surfaces.

"The improved insights into human physiology and medicine, in particular respiration in a low-gravity environment, will have potential benefits on Earth — for example, for developing new means to deliver medicines and for developing new treatments," Cain said.

Given the jaggedness and abrasiveness of lunar dust, the stuff could help scientists study the mechanisms and treatment of skin damage.

"The investigation of skin cellular changes, due to dust damage in a low-gravity environment, will be invaluable for the cosmetic industry in the development of terrestrial applications to treat skin conditions," Cain said.

The impetus to reach the moon and successfully establish settlements on the lunar surface will involve a greater need for astronauts — and future space tourists — who can withstand the harsh conditions. This will see the development and application of "exposome screening" for use in the selection of moon travelers, Cain suggested. That involves a collection of environmental factors, such as stress and diet, to which an individual is exposed and which can have an effect on health.

Those individuals with the necessary genetic makeup to resist radiation and the long-term impacts of microgravity will be at a major advantage for journeying to the moon, Cain said. "Exposome technology as developed for moon exploration will have many spinoffs terrestrially — for example, in the selection of staff for work in extreme environments."

Over the long term, Cain said, the push to explore the moon and establish permanent settlements will include the need for the development of health and safety legislation to ensure that people work in safe conditions. "There will be a need to develop training, education and research establishments and the development of vaccines to combat the potential for the emergence of pathogenic microbes within the settlements due to mutation," he said.

"It can be seen, therefore, that the moon is not a 'been there, done that' world. There will be plenty of opportunities for those willing to undertake the challenges," Cain said. "The exploration of the moon will be exciting because of the opportunities for understanding the health hazards, for developing the means to identify and control them and for applying the lessons learned terrestrially."

Have you ever wandered on a beach and nearly stepped on a small piece of glass?

Something similar will likely happen to future lunar explorers, who will be walking on a "beach" primarily made up of busted-up bits of glass-like shards. They are the remains of billions of years of micrometeorite bombardment and a lack of natural weathering of the moon's near-vacuum environment.

"These sharp particles can penetrate spacesuit layers, scratch visors and gauges and clog mechanical mechanisms beyond repair," said Ryan Kobrick, an assistant professor of spaceflight operations at Embry-Riddle Aeronautical University in Daytona Beach, Florida. He's been studying the moon's fine-grained particles and has a few warnings.

"Future lunar explorers will be faced with similar hardships experienced by the Apollo astronauts," Kobrick told Space.com, "but at a greater magnitude if they plan to stay more than a few days. The fine-grained particles are invisible to the human eye, lurking within the lunar regolith, the meter-thick upper soil layer of the moon.

"Equipment will have to be either robust to handle the abrasive environment, or disposable/repurposed after only a few excursions in the field. Regardless of task, ranging from scientific fieldwork to resource extraction and even to lunar vehicle joyriding of tourists, explorers are going to get dusty and dirty," Kobrick advised.

"There are various technologies that can aid in dust mitigation, like slick coatings and electrostatic devices, but a more sustainable approach will be to prepare for a dirty operational environment," he added.

Kobrick offered an interesting Earth analogy to the issue of hazardous particles on the moon.

"Coal mining has many parallels to lunar activity, and the health risks even relate," he said. "As the Apollo moonwalkers reentered their lunar module, they brought dust from their suits into the habitable volume, and it coated their skin and equipment. They had minor irritations and possible hay fever symptoms from ingestion."

These are major risks to human health and performance, Kobrick stressed. Moreover, lunar dust could damage sensitive equipment both inside the habitat and outside on the lunar surface.

"Wet wipes — or dry wipes, since water will be a precious commodity — and vacuum cleaning will become routine for lunar habitants," Kobrick said. "Safety maintenance and recertification will be critical operations, given the dust hazards. Field equipment will be treated more like an airplane being turned around for the next flight versus just parking your car for the night."

Long-duration habitation on the moon will change the paradigm of clean-room vehicles, especially as lunar mining kicks into high gear. "Human exploration is dependent on being able to traverse foreign environments, but the number of cycles that built-to-last equipment must endure will determine how far our moon booties will take us," Kobrick concluded.

So troublesome is the dust issue, a meeting next year focuses on the impact of lunar dust on human exploration.

The workshop is being organized and chaired by Joel Levine, research professor in applied science at the College of William and Mary in Williamsburg, Virginia, and consultant to the NASA Engineering and Safety Center in Hampton, Virginia.

"One of the major unexpected discoveries of the Apollo program was the deleterious impact of lunar dust on the astronauts and their equipment, including their spacesuits," Levine told Space.com.

"As the U.S. begins a new program named Artemis, of human exploration and colonization of the moon, with astronauts spending more and more time working on and exploring the lunar surface, we must find solutions to mitigate/reduce the impact of lunar dust on the astronauts and their equipment," he said.