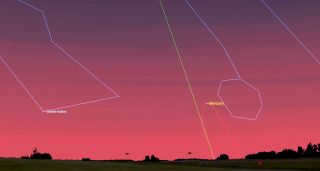 On the evening of Tuesday, February 26, Mercury (orbit shown as red curve) will reach its widest separation, 18 degrees east of the Sun. With Mercury sitting above a nearly vertical evening ecliptic, this will be the best appearance of the planet in 2019 for Northern Hemisphere observers. The optimal viewing times fall between 6:15 and 7:15 p.m. local time. Viewed in a telescope (inset) the planet will exhibit a waning half-illuminated phase.
(Image: © Starry Night software)

Once again, it is time to seek out what has often been called the most difficult of the five brightest naked-eye planets to see: Mercury. I've always felt that the oft-used moniker "The Elusive Planet" is not a fair one, because it gives the impression that sighting Mercury is always a major accomplishment.

While that is certainly true more often than not, there are some occasions — and this is one of them — when making a Mercury sighting requires almost no effort. You simply must know when and where to look soon after sunset, and find a clear and unobstructed western horizon to catch a view of this, the smallest planet (diameter: 3,032 miles; 4,880 kilometers) in our solar system.

So right now, we're in the midst of an excellent "window of opportunity" for viewing Mercury in the evening sky. That window, which will probably close for most viewing locations after March 6, will provide very good chances for you to see it with your own eyes.

Right now, Mercury is visible about 45 minutes after sunset, very near to the horizon, a bit to the south (left) of due west. But if your sky is clear and there are no tall obstructions to your view (like trees or buildings), you should have absolutely no trouble in seeing it as a very bright "star" shining with just a trace of a yellowish-orange hue. Currently, Mercury is shining at a very bright magnitude of -0.9 (lower magnitudes are brighter). In fact, among the stars and planets, Mercury now ranks a very respectable fourth, behind Venus, Jupiter and Sirius (the brightest star).

In the evenings that follow, Mercury will diminish — slowly at first — in brightness, but it will also be arriving at its greatest elongation, 18.1 degrees to the east of the sun, on Feb. 27.

Shining at magnitude -0.3, Mercury will appear as a very bright, solitary "star," low in the western sky and setting more than 1 1/2 hours after the sun — just after evening twilight has ended. As a result, this will be Mercury's best evening apparition of 2019.

Through telescopes, Mercury, like Venus, appears to go through phases like the moon. For example, on Feb. 11, when Mercury was starting to appear in the western twilight sky, it was a nearly full disk (94-percent illuminated) and shining just a trifle dimmer than Sirius at magnitude -1.3. [Best Telescopes for the Money - Reviews and Guide]

By the time it arrives at its greatest elongation, it will appear 44-percent illuminated — in a fat crescent phase — and the amount of its surface illuminated by the sun will continue to decrease in the days to come. So when it begins to turn back toward the sun's vicinity after Feb. 27, it will fade at a rather rapid pace: nearly 0.3 magnitude per day.

In fact, by the evening of March 6, Mercury's brightness will have dropped to magnitude +1.6, only as bright as the star Castor in Gemini and only a tenth as bright as it is now. In telescopes, it will appear as a slender crescent phase, its disk only 14 percent illuminated. In all likelihood, this will be your last view of Mercury, for the combination of its rapid fading and its descent into the brighter sunset glow will finally render it invisible after the first week of March.

In old Roman legends, Mercury was the swift-footed messenger of the gods. The planet is well-named, because it is the closest planet to the sun and the swiftest member of the sun's family of planets, averaging about 30 miles per second in its orbit; making its yearly journey in only 87.97 Earth days.

Interestingly, the time it takes Mercury to rotate once on its axis is 58.65 days; it has a 3:2 resonance with its orbital period. Or in other words, it rotates on its axis exactly three times for every two revolutions it makes around the sun, so that all parts of its surface experience 87.97 days of torrid heat, followed by 87.97 days of frigid cold. Although its mean distance from the sun is only about 36 million miles (58 million km), Mercury experiences by far the greatest range of temperatures of any planet: 800 degrees Fahrenheit (427 degrees Celsius) on its day side; -280 F (-173 C) on its night side.

In the pre-Christian era, this speedy planet actually had two names, as observers hadn't realized it could alternately appear on one side of the sun and then the other. Mercury was called Mercury when in the evening sky, but was known as Apollo when it appeared in the morning. It is said that around the fifth century B.C., Pythagoras pointed out that they were one and the same.

Joe Rao serves as an instructor and guest lecturer at New York's Hayden Planetarium. He writes about astronomy for Natural History magazine, the Farmers' Almanac and other publications, and he is also an on-camera meteorologist for Verizon FiOS1 News in New York's Lower Hudson Valley. Follow us on Twitter @Spacedotcom and on Facebook.