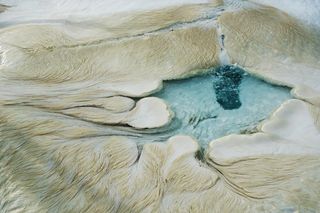 A terrestrial bacterium called Sulfurihydrogenibium yellowstonense makes its home in hot springs with conditions similar to certain areas on Mars. The bacteria trigger the formation of a rock type called travertine, which can form in pasta-like strands.
(Image: © Tom Murphy)

Let's be very clear: No one is suggesting that Martians feast on pasta during a Red Planet all-you-can-eat buffet.

But if scientists find a type of rock on Mars that looks a bit like fettuccine, it could be a key sign that a certain type of bacteria once lived on Earth's next-door neighbor, researchers said in a new study. That hypothesis is based exclusively on observations made here on Earth; scientists have found neither this type of rock on the Red Planet nor any definitive proof of life on Mars. Nevertheless, it's an intriguing feature that scientists can look for as they seek to better understand the Red Planet.

"If we see the deposition of this kind of extensive filamentous rock on other planets, we would know it's a fingerprint of life," lead author Bruce Fouke, a geologist at the University of Illinois at Urbana-Champaign, said in a statement. "It's big and it's unique. No other rocks look like this. It would be definitive evidence of the presence of alien microbes."

Fouke and his colleagues studied bacteria taken from Yellowstone National Park's Mammoth Hot Springs, where the water is slightly acidic and reaches temperatures of over 150 degrees Fahrenheit (65 degrees Celsius).

Specifically, the scientists looked at a group of bacteria called Sulfurihydrogenibium, nicknamed sulfuri. These bacteria live in strings that can reach up to 4 inches (10 centimeters) long. Those strings then stick together in structures scientists call filamentous mats, which help the organisms stick together with their cohort in the flowing hot water.

But in the environment of the hot springs, these bacterial mats are "entombed" by rock, coated with crystals of a compound called calcium carbonate in the form of travertine. Each strand picks up a layer of rock about 0.2 inches (5 millimeters) thick every day.

Fouke and his colleagues wanted to better understand these bacteria and the rock that builds up around them, so the researchers went fishing for mats of stringy bacteria. "They form tightly wound cables that wave like a flag that is fixed on one end," Fouke said. "These sulfuri cables look amazingly like fettuccine pasta, while further downstream, they look more like capellini pasta."

The team ran a whole host of tests on both the bacteria and the rock. The researchers analyzed the DNA sequences of the samples, so they could identify the precise species they were looking at. They also analyzed the proteins these bacteria were producing and how the organisms produce energy to feed themselves.

But the research wasn't just about the bacteria themselves; the scientists also wanted to understand the rock encasing the life-forms and how these organic and inorganic materials interacted within the hot spring's waters.

That's why Fouke and his colleagues think the travertine could be such a valuable clue for scientists looking for signs of life on Mars; because the rock built itself around bacteria, it retains information about that bacteria.

And if you're wondering how the researchers collected the bacterial samples they studied in this project: They used sterilized pasta forks, naturally.

The research is described in a paper published April 30 in the journal Astrobiology.