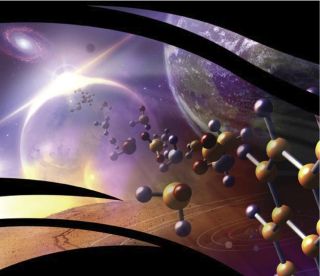 IRVINE, Calif. — Mary Voytek, NASA's senior scientist for astrobiology, likes to tell other researchers that "everyone is an astrobiologist; they just don't know it yet."

What she means is that answering the question currently at the heart of astrobiology — Does life exist beyond Earth? — requires input from an incredibly wide range of disciplines, including astrophysics, geology, exoplanet science, planetary science, chemistry and various subfields of biology.

On the plus side, that means astrobiologists have a lot of resources to draw on. But it also means that people like Voytek have to deal with a flood of relevant information coming in from all of those scientific fields and figure out how to get scientists from those disciplines to work together. Voytek and other NASA representatives discussed how they are dealing with that information influx, and the interdisciplinary nature of the field, at the Astrobiology Science Strategy for the Search for Life in the Universe meeting, hosted  by the National Academies of Sciences, Engineering and Medicine, here at the University of California, Irvine this week. [Are We Alone? Scientists Discuss the Search for Life and Odds of E.T.]

An influx of information

In 2017, Congress made an update to the law that defines NASA's purpose and objectives:  the new language specified that the agency should pursue an understanding of the nature and distribution of life beyond Earth, if it exists. Of course, NASA has been searching for alien life for a very long time, but the new wording may reflect the fact that even members of the public (and members of Congress) are aware that the field of astrobiology is heating up.

"For a long time, the sort of research we do in astrobiology was technology-limited," Voytek told Space.com in an interview. But modern technological innovations have "blown things open for us," she said, meaning astrobiology is seeing huge amounts of relevant information come from every direction, from medicine to planetary science.

Here are a few examples of the places where that information is coming from:

And that, as they say, is just the tip of the iceberg. In her talk, Voytek drew a comparison to a famous quote from the astronomer Carl Sagan: "If you want to make an apple pie from scratch, you must first invent the universe." When applied to the search for life, the quote essentially means that understanding how life formed in the universe (and if it is unique to Earth) requires an understanding of the entire history of the universe. (Voytek said research into the Big Bang is just about the only area of space science that might not be applicable to astrobiology — but you never know.)

The interdisciplinary nature of astrobiology has a concrete impact on Voytek's job. She has spent a great deal of time coming up with ways to get people from different scientific disciplines to work together. The biggest example of that effort was the establishment of a program called NExSS, or the Nexus for Exoplanet System Science. The program brings together researchers from Earth science, planetary science, heliophysics and astrophysics, to pursue specific goals that support the larger pursuit of looking for alien life. That can be difficult when people from diverse disciplines are traditionally separated from one another even within NASA, according to Natalie Batalha, a NASA astrophysicist and project scientist for NASA's planet-hunting Kepler mission. Batalha, who is part of the NExSS leadership team, spoke via telephone during the conference about some of the programmatic goals of NExSS, in addition to the program's science objectives.

"We set out to define common goals across divisions within the NASA Science Mission Directorate," Batalha said. The program also aims to "break down barriers" between divisions at NASA, because those divisions can "lead to stovepipe thinking with regard to research."

"So the idea is to always be mindful of these strategic objectives in addition to the science that we're trying to accomplish," she said.

In the fall of 2017, the agency approved funding for the Center for Life Detection at NASA's Ames Research Center in California. It will be headed by exobiology research scientist Tori Hoehler, who also spoke via telephone at the conference. One of the center's main objectives will be to provide an online organization system for scientific papers relating to the search for extraterrestrial life. Instead of just searching through scientific papers that share similar keywords, NASA's new online system will group papers based on shared hypotheses that they investigate or discuss, regardless of the scientific discipline they come from or if they specifically reference astrobiology, Hoehler said.

Another initiative that Voytek oversaw was a program called the Ideas Lab on the Origins of Life, a collaboration with the National Science Foundation (NSF). The program brought together scientists from different disciplines and let them work together to come up with creative research projects that focused on the question of how life emerged on Earth. Specifically, the participants were supposed to try to address issues relating to the "giant chasm between the reactions of small molecules that can generate nucleic or amino acids and, possibly, polymerize them, and a fully developed system that satisfies the working definition of 'life,'" according to the program website. The 2016 program produced five research projects that will be funded by NASA and the NSF for two years.

Coming up with a "working definition" of "life" is another major goal of the astrobiology community, and Voytek said this is one area that is far from settled. On a subcellular level, it's extremely difficult to come up with a list of characteristics that would describe all known life-forms that would also exclude things that would be considered abiotic, she said.

"If you ask 100 scientists for a definition of life, you'll get 110 definitions of life," Voytek said during her talk.

Even if scientists can't agree on a good definition of life quite yet, Voytek said it's important for the community to work with a clear and specific definition when executing an experiment or designing an instrument, even if that definition turns out to be wrong. That way, researchers can at least look back and learn something from the data they collected, because their hypothesis (and the form of "life" they were looking for) was specific and clear. A muddy definition of life will make it more difficult to interpret those results later, Voytek said.

"This is a rapidly changing field, and anything you put down at any moment, by the time it's published, needs to evolve," she told Space.com. "The point of my presentation was, the definition of life that we use needs to be clear and reasonably well-defended, and everything needs to flow from that [definition] from that point forward."

Douglas Hudgins, program scientist for NASA's Exoplanet Exploration Program, spoke at the meeting via telephone and discussed the ways that past, current and future NASA missions are contributing to astrobiology. From the agency's biggest telescopes, like the Hubble Space Telescope and the upcoming James Webb Space Telescope, to robotic missions to Mars, there are many space-based missions that can contribute to the quest to find out if life exists beyond Earth.

Voytek said most researchers are enthusiastic when she tells them how their field of study can factor into the search for life in the universe.

"Everybody gets really excited about being a part of answering this really big question," she said. "It's very unifying."