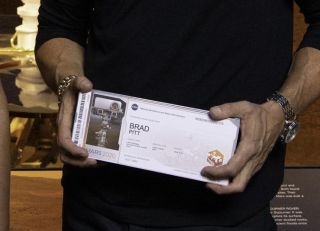 Actor Brad Pitt is sending his name to Mars on NASA's 2020 Mars rover. Sept. 30 is the last day to submit your name to NASA.
(Image: © NASA/JPL-Caltech)

Update: The deadline for to send your name to Mars has passed. NASA's student contest to name the Mars 2020 rover is still under way through Nov. 1.

If you want your name to hitch a ride to Mars with NASA's next rover in 2020, you better act fast. Today's the last day to add your name to the more than 10 million that have already signed up.

"It's the final boarding call for you to stow your name on NASA's Mars 2020 rover before it launches to the Red Planet," NASA officials wrote in a statement last week. "The Sept. 30 deadline for NASA's 'Send Your Name to Mars' campaign gives the mission enough time to stencil the submitted names - over 9.4 million so far - on a chip that will be affixed to the Mars 2020 rover."

NASA began collecting names for the new Mars rover on May 21, with entrants filling out a short form with their name and earning a souvenir boarding pass and "frequent flyer" points in return. You can add your name to the roster here: https://go.nasa.gov/Mars2020Pass.

"This is part of a public engagement campaign to highlight missions involved with NASA's journey from the Moon to Mars," NASA officials wrote in the statement. "Miles (or kilometers) are awarded for each 'flight,' with corresponding digital mission patches available for download."

Even Brad Pitt, star of the science fiction space epic "Ad Astra," has added his name to the list. NASA shared a photo of Pitt posing with this Mars boarding pass and a rover mockup last week.

After Sept. 30, engineers with the Microdevices Laboratory at NASA's Jet Propulsion Laboratory in Pasadena, California will stencil all the names onto a tiny silicon chip with an electron beam, writing the lines of text about 75 nanometers tall. That's smaller than one-thousandth the width of a single hair on your head.

"At that size, millions of names can be written on a single dime-size chip," NASA wrote. "The chip will ride on the rover under a glass cover."

More than 2 million names rode to Mars on NASA's InSight lander, which touched down on the Red Planet in November 2018. So far, the 2020 Mars rover project has blasted way beyond that record.

While NASA's "Send Your Name to Mars" program is closing, there is still one last name needed for the 2020 Mars rover: the name of the rover, itself.

NASA is currently running a contest for students in grades Kindergarten through grade 12 to name the rover. The entry period ends Nov. 1. For details on how to submit a name for the 2020 Mars rover, visit: https://go.nasa.gov/name2020.

The 2020 Mars rover is scheduled to launch to the Red Planet on July 2020 and land inside the 28-mile-wide (45 kilometers) Jezero Crater. The 2,300-lb. (1,040 kilograms) rover, with its nuclear power source, will search for signs of past microbial life, study the climate and geology of Mars, and collect samples that may be returned to Earth on a future mission.