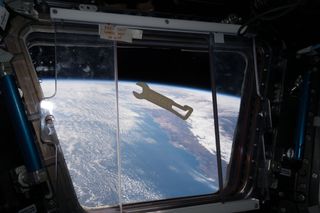 Made In Space, which 3D-printed this wrench (and many other objects) in orbit, aims to help establish an off-Earth economy. Its sister company, Made In Space Europe, is working toward the same goal by developing mass-market robotic-arm technology for spacecraft.
(Image: © NASA/Made In Space/Lowe's)

Robotic arms for spacecraft may not be specialty items for much longer.

The new Luxembourg-based company Made In Space Europe is working to develop a mass-market, relatively low-cost robotic arm for off-Earth use. Such a product does not currently exist, and making one available could accelerate humanity's exploration of, and expansion into, the final frontier, company representatives said.

The few arms that adorn spacecraft today are bespoke one-offs crafted for specific missions, which are usually run by government agencies, Made In Space Europe co-founder and managing director Jason Dunn told Space.com.

Related: On-Orbit Satellite Servicing: The Next Big Thing in Space?

"Those robotic solutions end up costing many tens of millions — usually over $100 million," Dunn said.

"We think that those missions will continue, and those companies will continue to provide those solutions," he added, referring to the expensive specialty arms. "But what we believe at Made In Space Europe is that there's a completely new set of missions on the horizon — ones that are not one-off missions but repeatable, scalable commercial missions that need not one robotic arm once in a decade but hundreds of robotic arms every few years."

Made In Space Europe aims to meet, and help stoke, that coming demand. And those ambitions just got a boost: Today (Dec. 9), the company and the Luxembourg Space Agency announced a joint development contract with the European Space Agency.

"Made In Space Europe will lead the technical developments of the project in Luxembourg, which are focused on developing a robotic arm for space, and evaluating the viability of a low-cost, scalable robotic arm system for space missions," company representatives said in a statement today. (Terms of the contract were not disclosed.)

Made In Space Europe already has some early customers for this arm under contract, and risk-reducing demonstration missions could launch to Earth orbit as soon as 2021, according to the statement.

"We have to move really fast," Dunn said, explaining that commercial demand for the arm will probably start picking up in earnest just four to five years from now.

In the short term, that demand will likely come from customers that want to service satellites in orbit and perform work on and around the moon. For example, the arm — which will be modular and therefore scalable — could be used to remove science payloads from their housings, exposing them to the lunar environment, Dunn said.

Over the longer term, the mass-produced arm should shoulder other, more complex burdens as well,  including helping to assess and exploit lunar and asteroid resources, Dunn said. Such use cases would incorporate advances in machine learning and artificial intelligence, fields that are progressing very rapidly, he added.

And, in a more general sense, advanced robotic tech should help keep people safer in space, just as it does here on Earth, Dunn said. (Think about bomb-disposal robots and machines that perform industrial welding, which produces lots of toxic fumes.)

"We feel like the robotic technology is going to be a kind of helping hand to the people living and working in space, to take them out of harm's way," he said.

This is key to the overall vision of both Made In Space Europe and its sister company, Made In Space, which Dunn co-founded back in 2010.

"We fundamentally believe that humanity will not remain a one-planet species," Dunn said. "It's the industrialization of space that enables humanity to move into the cosmos."

Made In Space is blazing a trail in off-Earth manufacturing; the California-based company has already launched multiple machines to the International Space Station  — two 3D printers, a plastic recycler and a machine that makes high-value optical fiber.

Made In Space is also developing an assembly technology called Archinaut, which is designed to repair and upgrade existing satellites and build entirely new structures, such as big space telescopes, off Earth. NASA recently awarded Made In Space nearly $74 million to give Archinaut an in-space test; this demonstration mission could launch as early as 2022.

Archinaut will feature robotic arms, but that tech is being obtained from subcontractors. So, Made In Space Europe is treading different ground than its sister company.

Made In Space is working on the system-level architecture that will help build a foundation for industry in orbit and beyond, Dunn said. This broader effort requires advances in robotics tech, and that's what Made In Space Europe is focusing on, he explained.