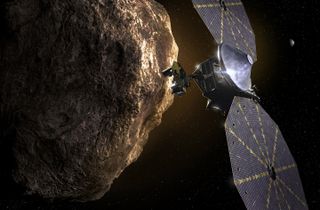 An artist's depiction of the Lucy spacecraft studying an asteroid.
(Image: © NASA)

NASA's Lucy asteroid mission already faced a busy itinerary with seven different space-rock targets. Now, the team has discovered that one of those asteroids has a tiny companion.

The realization came thanks to the Hubble Space Telescope, which the team first recruited in 2018 to study a space rock called Eurybates. Like several of the other Lucy mission targets, Eurybates belongs to a group of asteroids known as Trojans, which occupy about the same orbit around the sun as Jupiter but cluster ahead of or behind the gas giant. Scientists had wondered whether Eurybates might have a companion, but combing through those 2018 Hubble images came up empty — until the researchers revisited the data in November 2019 and saw something.

"We asked for more Hubble time to confirm, and they gave us three tries," Keith Noll, Lucy project scientist at NASA's Goddard Space Flight Center in Maryland and a co-discoverer of the Eurybates satellite, said in a statement. "In the first two observations in December we didn't see anything, so we began to think we might be unlucky. But on the third orbit, there it was." That third orbit came in early January.

Scientists working on the Lucy mission hope to get another look at the satellite next month, when it comes back into Hubble's view for the first time since the discovery was confirmed in January. In the meantime, they are focused on using what data they have to pin down the satellite's orbit around Eurybates, which should increase the odds of successfully observing it during the next attempt.

What the researchers know so far suggests that the newly identified space rock is truly tiny: because the object is more than 6,000 times fainter than Eurybates, the satellite is likely less than 0.6 miles (1 kilometer) across, according to the statement.

The scientists on the Lucy mission hope that the newly discovered satellite — and the rest of the mission's Trojan tour — will help them understand how the solar system came to look the way it does. The Trojans are likely crumbs that slipped away during the formation of the gas giants and became trapped in these pockets of orbital stability, which means these space rocks should hold clues to the early days of the solar system.

Eurybates and its tiny companion may also be two pieces of a formerly larger space rock, the scientists suspect, which means studying the pair could help scientists understand what happens during solar system collisions.

"There are only a handful of known Trojan asteroids with satellites, and the presence of a satellite is particularly interesting for Eurybates," Thomas Statler, Lucy Program Scientist at NASA headquarters in Washington, said in the statement. "It's the largest member of the only confirmed Trojan collisional family — roughly 100 asteroids all traceable to, and probably fragments from, the same collision."

The discovery should not affect the plan for Lucy, according to NASA, although the team behind the mission will be evaluating the situation to be sure the spacecraft won't accidentally slip too close to the rock and smash itself to bits.

Lucy is currently scheduled to launch in October 2021 on a United Launch Alliance Atlas V rocket and reach the first of its targets in 2027.