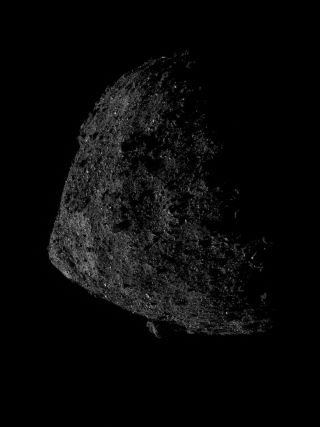 NASA's OSIRIS-REx captured this image of the asteroid Bennu from just 0.4 miles (680 meters) above the surface on June 13, 2019.
(Image: © NASA/Goddard/University of Arizona/Lockheed Martin)

NASA's OSIRIS-REx spacecraft inched closer still to an asteroid called Bennu, breaking the record it set previously — but the real reward is the stunning photographs the probe has captured since the maneuver.

The spacecraft first slipped into orbit around Bennu, a near-Earth asteroid, on Dec. 31. At the time, the probe became the vehicle orbiting the smallest object to date. (Smaller objects are trickier to safely orbit.)

But that was only the beginning for the daredevil spacecraft, which on June 13 maneuvered itself into a new orbit just 0.4 miles (less than 700 meters) above the asteroid's surface. That successful approach let OSIRIS-REx break its own record for closest orbit of an object.

And, of course, the result is stunning images, in which scientists can make out details as small as 1.6 feet (0.5 m) when conditions are best, according to a NASA statement.

But the spacecraft's human handlers are splitting their time between processing photographs from the new orbit and going through the images OSIRIS-REx had already sent home.

"Didn't think Bennu's boulders could surprise me at this point in the game," a mission team member posted from the spacecraft's official Twitter account of an image taken on April 12. "But look at this weirdo. Just stickin' up like nbd [no big deal]."