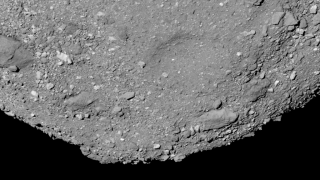 A wide-angle view of Bennu's south pole captured by the OSIRIS-REx spacecraft on March 14, 2019.
(Image: © NASA/Goddard/University of Arizona)

NASA's OSIRIS-REx asteroid-sampling probe has shattered the close-orbit record it set less than six months ago.

But OSIRIS-REx cut that distance in half yesterday (June 12), performing a maneuver to get a mere 0.42 miles (0.68 km) above the asteroid's surface.

The probe will stay in this superclose orbit, a phase known as Orbital B, until the second week of August, mission team members said.

For the next two weeks, OSIRIS-REx will photograph Bennu's horizon frequently, to help mission scientists better understand the strange particle-ejection events the probe observed earlier this year. Over the final five weeks of Orbital-B, the probe will map Bennu in detail using most of its science instruments.

"All of these measurements are essential for selecting the best sample-collection site on Bennu's surface," OSIRIS-REx team members wrote in an update today (June 13).

At the end of Orbital-B, the spacecraft will raise its orbit to 0.8 miles (1.3 km) once again, kicking off the Orbital-C campaign.

The $800 million OSIRIS-REx mission, which launched in September 2016, aims to shed light on the solar system's early days and the role that carbon-rich asteroids such as Bennu may have played in helping life get started on Earth (by delivering water and organic molecules to our young planet via impacts).

Much of this work will be done by scientists here on Earth. OSIRIS-REx is scheduled to snag a sizable sample of Bennu material next summer and deliver it home in a special return capsule in September 2023.

The mission team hasn't picked a sampling site yet. Scientists will use data gathered during the Orbital-B phase to select four candidate sites, whose suitability will be assessed this fall.

OSIRIS-REx isn't the only asteroid-sampling mission in operation at the moment. Japan's Hayabusa2 spacecraft has already collected one sample of the 3,000-foot-wide (900 m) asteroid Ryugu and is scheduled to snag another one soon. This material will come down to Earth in December 2020, if all goes according to plan.