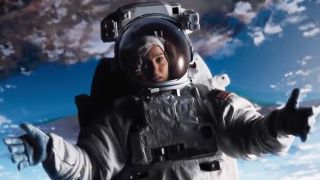 "Lucy in the Sky," the new movie that's loosely "based on real events," has polarized cinema audiences. Some praise its new, fictionalized take on the Lisa Nowak story, and others criticize that the film, which depicts seldom-seen women astronauts, reinforces negative gender stereotypes.

Nowak, whose story the film is loosely based on, is a former NASA astronaut who flew on space shuttle Discovery's STS-121 mission to the International Space Station. In 2004, she began an affair with former shuttle pilot Bill Oefelein; Oefelein was divorced, but Nowak was still married.

In February 2007, after Oefelein ended the affair and became involved with Air Force Capt. Colleen Shipman, Nowak confronted her romantic rival in the parking lot of Orlando International Airport after driving all the way from Houston. She was arrested and subsequently charged with the attempted kidnapping of Shipman. Nowak ultimately pleaded guilty to felony burglary and misdemeanor battery charges in November 2009 and served a year of probation.

Regardless of your opinions on those issues, everyone can agree on one thing: the quality of the film's cinematography.

While "Lucy in the Sky" didn't have quite the same budget as other, recent sci-fi blockbusters, like "Ad Astra," director Noah Hawley and cinematographer Polly Morgan used improvisation and innovative techniques to make something spectacular. In particular, they altered aspect ratio (the ratio of the screen's width to its height) to make a truly visually effective feature motion picture.

The filmmakers drew from a number of different inspirations to create the movie's striking effects, Morgan said.

"We looked all over the map, but really, we looked at 'Gravity,' mainly because of its technical execution," Morgan told Space.com. "But then, we also referred back to older space films, like 'The Right Stuff' for example, which was really more old-fashioned filmmaking in that it was shot on film and had lots of texture and a feeling of weather.

"And then [Hawley] likes to approach things in a very intellectual way," Morgan added. "So, the aspect ratio changes throughout the film. We really chose that in order to try and help the viewer experience her emotions with her. So, when she's up in space or when she's in her element at NASA, the frame opens up to a wide-screen aspect ratio of 2:4. And then when she's feeling more claustrophobic and her world is closing in on her, we shrunk the frame back to a 4:3, square aspect ratio."

"Lucy in the Sky" is projected at the aspect ratio 1.85:1 [a common, widescreen aspect ratio]," Morgan said, adding that it changes throughout the course of the movie.

"Even though it's subtle in the movie, it was a very complex approach to try and illustrate a wider scale of her environment and her detachment to it," Morgan said.

Morgan started as a runner (someone who assists wherever they're needed) at Ridley Scott's RSA Films production company and then became an intern on "Inception." Her love of science fiction began even earlier, though, and so it makes sense that she continues to work in the genre today, she said.

"I grew up with the original 'Star Wars' movies and even as a young girl had all the toys. And then the 'Star Trek Original Series,' that was part of my upbringing too. Space and the idea of exploration and discovery, I think we're all intrigued by that," Morgan said. "As a young person growing up and seeing those adventurous tales of space and people exploring new worlds, it's an exciting realm to be in. It's like the undiscovered world."

Science fiction certainly seems to be back in fashion, as Netflix is set to drop Season 3 of "Lost in Space" on Dec. 24, Amazon will release Season 4 of "The Expanse" on Dec. 13, Disney+ is releasing Season 1 of "The Mandalorian" on Nov. 12 and Apple TV+ premiered the new series  "For All Mankind" on Nov. 1 (plus, there's a ton of new "Star Trek" coming next year).

Morgan has been interested in some of the new sci-fi content, too, and how it approached challenges that "Lucy in the Sky" faced, she said. "There was one on Hulu called 'The First' that Sean Penn was in recently. I was fascinated because of the NBL sequence in 'Lucy' — the Neutral Buoyancy Lab is NASA's underwater training facility [used] to prepare astronauts for space — and [I] know that they covered that in that show and I hadn't really seen that too much.

"Because we had included it, I was interested to see what they had done, and it was done quite well because it's difficult to do underwater filming, especially in a TV production."

"Lucy in the Sky" creators faced another strange challenge when they wanted to use the NASA emblem, which couldn't be exactly correct as this is a fictional story. You'll notice the NASA "meatball" patch on everyone's flight suit is just different enough so that it's not identical to the official one.

"NASA were very tricky with us using their logo. So we had to redesign everything in a subtle way, so, it was slightly different," Morgan said.

To get the underwater scenes right was trickier than just redesigning a logo, however. "You're actually allowed now, I believe, to go to Texas and shoot in the real Neutral Buoyancy Lab. I think it's $40,000 a day or something to go to the actual location and film there. But we couldn't afford that," Morgan said with a laugh.

"So, we actually shot part of that sequence in a swimming pool up in Santa Clarita in [California, near] Los Angeles, a college pool, [at the] College of the Canyons," she said. "We rigged the pool with a massive amount of blue screen in certain areas. And we took Natalie into the water with an underwater housing on the camera with underwater crane and equipment.

"Then, the rest of it was done on a sound stage in Burbank, and we shot her on wires. The camera was on a crane with Natalie and the divers on wires. We used an approach called 'dry for wet,' where basically you shoot Natalie and the other cast of elements and then you composite them into a CG [computer-generated] world, which was the Neutral Buoyancy Lab and the ISS replica."

"It's really hard whenever anybody uses 'dry for wet' – which, for example, was used in the movie 'The Shape of Water' — because you use fans and you blow people's hair around and their costumes around. And you float on wires and you backlight smoke and all this to get shots of light [that look like they're underwater]. But obviously, in the NBL at NASA, the water is crystal-clear and everyone's in space boots and diving suits. So, there's really no hair to move around. So, it was quite a challenge," Morgan said.