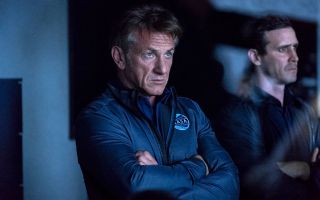 Commander Tom Hagerty, as played by Sean Penn, and Nick Fletcher, played by James Ransone, are shown here preparing for the potentially life-threatening consequences of launching to Mars in the brand new show "The First," streaming on Hulu starting September 14.
(Image: © Alan Markfield/Hulu)

Hulu's newest space show, "The First," provides a glimpse into the bureaucratic, frustrating and heartbreaking side of space travel.

"The First," which stars Sean Penn alongside LisaGay Hamilton, Natascha McElhone and Anna Jacoby-Heron, follows an astronaut crew hoping to be the first to step foot on the Red Planet. The show, which is based in the 2030s, is rooted in real-life science (the show's science consultant, Charles Elachi, is a former director of NASA's Jet Propulsion Laboratory), but its main focus isn't rocket launches and in-your-face space action.

The show, whose first season premieres on Hulu today (Sept. 14), moves slowly. "The First" is a tense, interpersonal drama that might not be the ideal series for space fans looking for constant thrills. Still, this series reveals the inner workings and personal turmoil of space exploration that aren't as often thrust into the limelight. [Space Radiation Threat to Astronauts Explained (Infographic)]

Sean Penn plays Commander Tom Hagerty, an older, experienced astronaut who hopes to lead the first team to Mars. He struggles immensely with the idea of leaving his family behind yet again, to explore space without the certainty of return. The show also highlights his troubling and heart-wrenching relationship with his daughter, Denise, played by Jacoby-Heron, who is fighting addiction. It's clear from the start that Hagerty is no Chris Hadfield. Penn's character is more than a bit rough around the edges, though, like a real astronaut, his public demeanor is professional despite his emotional distress.

"The First" also dives into the relationships among the rest of the crew, showing realistic family conversations surrounding the possibility of never coming home from Mars. We, as a species, have our sights set on the Red Planet and, if space organizations follow through with plans to leave for Mars by the 2030's, these difficult conversations are inevitable.

Aside from the interpersonal, emotional aspect of space travel that the show explores, "The First" also gives viewers a glimpse into the bureaucracy of space. Laz Ingram, played by McElhone, leads the fictional private space agency that contracted with NASA for the Mars mission. Stern and almost strangely unemotional, Ingram at first seems to fulfill the "cold, impersonal" trope that is often written for female characters. But, as the show progresses, her true depth becomes apparent. As she works, Ingram faces backlash and red tape at every turn, dealing withbudget cuts, investigative journalists and tight deadlines. Through Ingram's character, in particular, the real-life pressure and volatility of space travel is on display in "The First."

Additionally, despite starring a white, male lead, the series has a relatively diverse cast and doesn't shy away from depicting discrimination in the space industry. Kayla Price, played by Hamilton, identifies as a black, queer astronaut whose leadership and experience are undercut and overlooked at one point in the show. The series shows Price's struggle to feel validated despite her experience, and the challenges she faces in confronting Ingram about the issue.

All in all, "The First" is not a typical, adrenaline-fueled space-race series. In some areas the plot drags, but overall, it is a compelling, behind-the-scenes look at space travel that fans of intense drama will love.