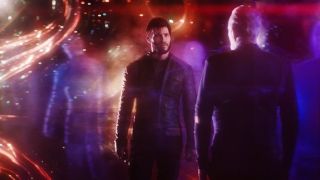 SyFy's grand alternate history of the House of El continues in Krypton's second season premiere. Picking up six months after last season's mammoth cliffhanger, "Light-Years From Home" spends much of its run time establishing Krypton's new world order, one that finds General Zod from the future (a smoldering Colin Salmon) leading a "new golden age" for Krypton, in hopes of saving it from its fated destruction. David S. Goyer and Cameron Welsh's opening script gets a little too bogged down in establishing the stakes this time and getting major players back on the board. But even that sluggishness can't repress the charm and ideals of Krypton. Ideals that keep the show holding the standard of Superman high and charm that proves that it still isn't afraid to go a bit broader. Though not a perfect season premier, "Light-Years from Home" finds Krypton getting even more ambitious for its second year.

Last season, Kandor City changed forever. And now, David S. Goyer and Cameron Welsh find themselves having to commit to those changes - at least, for the most part. Therein lies some of the weaker elements of this opening episode. When we last left Krypton, the timeline that Adam Strange (Shaun Sipos) was attempting to save was in flux for the worse, and series lead Seg-El (a more haunted and bearded Cameron Cuffe) had sacrificed himself to the Phantom Zone to stop Brainiac (Blake Ritson, playing up the delicious creepiness of the character and incredible makeup).

So naturally, a lot of this episode's make-up is dedicated to reestablishing this season's stakes and characters, post-Zod. Which is interesting, but never gets as exciting as the show wants it to be, even despite veteran TV director Marc Roskin's expansive direction, which highlights the wonderful Ridley Scott-esque production design and locations. It also somewhat limits some of the cast, mainly Salmon's booming take on Zod and Georgina Campbell's calculating but empathetic Lyta-Zod. While the latter gets a truly chilling scene showing just how far the Zod regime will go to ensure victory, I worry that this season's narrative doesn't have the same mythic stakes as the previous season. It is early days, for sure, but I really hope Campbell and Salmon get a bit more to do beyond exposition going forward.

But it's not all bad — just like the season before it, "Light-Years From Home" is at its best when it is delving into the heart and space operatics of the Superman mythos. From a breathtaking look at the Phantom Zone to the Krypton moon Wegthor to the planet Colu, Goyer, Welsh and Roskin continue to dig into the sandbox they are playing in. (So much so that even a certain Bad Bastich makes his hilarious debut here, heralded by the show's promotional campaign.) Standing as the sweet to the Kandor exposition's salty, the episode truly comes alive when dealing with these plots, anchored by the adorable chemistry between Cuffe and Sipos and the delicious villany of Ritson's Brainiac.

And with a commitment to the scale of Superman comes a continued commitment to his core tenets. Given voice by Ian McElhinney's Val-El, Welsh and Goyer show that even though they are making an action show, they have no plans to make it run counter to the ideals of Superman, detailing that the resistance against Zod puts a premium on saving lives. Though they might be bending it a bit with Seg-El's turn this episode, it is nice to see a Superman-based show that realizes that "there is always a way" aren't just empty words.

A mixed bag for sure, but Krypton still looks to be on the right track. Not only that, but emboldened by the success and response of the first season, they look to be getting bigger and weirder in pursuit of entertainment and doing right by Big Blue and his Super-Ancestors (and their space-hero best friend Adam Strange). Though you will have to wait until Wednesday to see for yourself, rest assured the same weird, fun, and dense Krypton fans enjoyed last year will be waiting for you.