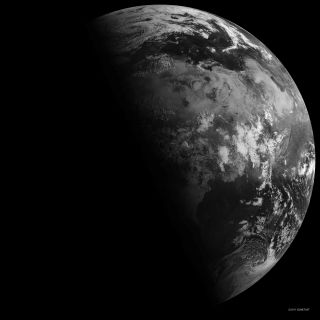 Summer will officially arrive in the Northern Hemisphere today (June 21), marking the longest day, the shortest night and the beginning of summer.

The June solstice will occur at 11:54 a.m. EDT (1554 GMT), as the sun reaches the point at which it is farthest north of the celestial equator. To be more precise, when the solstice occurs, the sun will appear to shine directly overhead for a viewer stationed on the Tropic of Cancer (latitude 23.5 degrees north) in the western Atlantic Ocean, roughly 600 miles (965 kilometers) to the northwest of San Juan, Puerto Rico.

From midnorthern latitudes, we can never see the sun directly overhead, but the same principle holds. For example, as seen from Philadelphia at 1:02 p.m. EDT on solstice day, the sun will attain its highest point in the sky for this entire year, standing 74 degrees above the southern horizon.

To gauge how high that is, your clenched fist held at arm's length measures roughly 10 degrees, so from the City of Brotherly Love, the sun will appear to climb more than "seven fists" above the southern horizon. And since the sun will appear to describe such a high arc across the sky, daylight will be at its longest extreme, lasting 15 hours and 1 minute.

Related: The Brightest Visible Planets in June's Night Sky: How to See Them (and When)

But this doesn't mean we can stargaze for the remaining 9 hours, because we also need to take twilight into consideration. Around the time of the June solstice at latitude 40 degrees north, morning and evening twilight each last 2 hours, so the sky is fully dark for only 5 hours.

Farther north, twilight lasts even longer. At 45 degrees, it lingers for 2.5 hours, and at 50 degrees, twilight persists through the night; the sky never gets completely dark. In contrast, heading south, twilight is shorter. At latitude 30, it lasts 96 minutes, while at the latitude of San Juan, it lingers for only 80 minutes. This phenomenon is why travelers from the northern U.S. who visit the Caribbean at this time of year get surprised at how quickly it gets dark after sunset compared to back home.

Incidentally, the earliest sunrise and latest sunset do not coincide with the summer solstice. The former occurred on June 14, while the latter does not come until June 27.

So far, so good

Conversely, back on Jan. 3, Earth was at perihelion, the point in its orbit closest to the sun. The difference in distance between these two extremes measures 3,109,667 miles (5,004,524 km), or 3.3% of the average distance between the sun and Earth. That small change leads to a difference of nearly 7% in the radiant heat received by the Earth.

Interestingly, it would be a much different story if we were on Mars. Compared to our nearly circular orbit, the orbit of Mars is noticeably more eccentric (elliptical). When Mars arrives at aphelion, the planet is receiving only 69% as much sunlight as it does at perihelion. This situation creates a seasonal asymmetry on Mars; the Martian southern hemisphere always suffers greater extremes between summer and winter than the northern hemisphere does.

After the sun arrives at its solstice point, it will begin to migrate back toward the south, and the amount of daylight in the Northern Hemisphere will decrease. Consider this: After today, the duration of daylight will not increase again until two days before Christmas.

But if you think about it, the length of daylight has been rather substantial since about the middle of May. And the lowering of the sun's path in the sky and the diminishing of the daylight hours in the coming days and weeks will be rather subtle, at least initially, during the first half or so of summer.

The traditional midpoint of the summer season is Aug. 1 which is marked on some Christian calendars as Lammas Day. The name is derived from the Old English "loaf-mass," because it was once observed as a harvest festival. But summer's true midpoint — the moment that comes exactly between the summer solstice and the autumnal equinox in 2019 — will not occur until Aug. 7 at 7:52 a.m. EDT (1152 GMT). On that day, again, as seen from Philadelphia, the sun will set at 8:08 p.m., with the loss of daylight since June 21 amounting to just 57 minutes.

But in the second half of summer, the effects of the southward shift of the sun's direct rays become much more noticeable. When autumn officially arrives, on Sept. 23, the sun for Philadelphians will set at 6:56 p.m., while the city will have lost 2 full hours of daylight since Aug. 7.

When he occasionally played left field during his Hall of Fame career with the Yankees, Yogi Berra would say that he didn't mind the outfield, except for one thing: During August and September, as the shadows across the ball field progressively lengthened, it got increasingly difficult for him to see a baseball hit in his direction. Berra might not have been able to explain the science of why the altitude of the sun lowered so perceptibly during the latter half of the summer, but, as only he could do, he was able to sum it all up in a simple Yogism: "It gets late early out there."