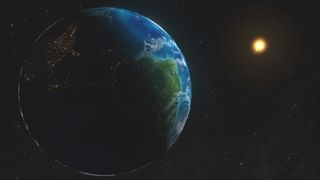 The sun radiates huge amounts of electromagnetic energy in all directions. Earth is only one small recipient of the sun's energy; the sun's rays extend far out into the solar system, illuminating all the other planets.
(Image: © NASA)

Early this morning (Jan. 3), Earth and the sun had their closest encounter of the year.

Earth's orbit around the sun is not perfectly circular, and today the planet reached perihelion, or its nearest point to the star in its yearly orbit. The close approach took place at 12:35 a.m. EDT (0535 GMT).

"The sun is the big controller of the radiation that the Earth receives," Walter Petersen, a research physical scientist in the Earth science branch at NASA's Marshal Spaceflight Center, told Space.com. "But even when you take into account that difference in distance between aphelion and perihelion, there's only about a 7 percent difference in average global [solar energy] that we receive. And so it doesn't amount to a great deal in terms of weather."

Winter begins in the Northern Hemisphere on the winter solstice, or the day when the sun is at its lowest point in the sky (making it the shortest day of the year). Winter lasts until the spring equinox, or the midway point between the winter and summer solstices. The solstices occur at opposite points in Earth's orbit around the sun, as do the equinoxes. If Earth moved at a steady speed in its orbit, then the same amount of time would pass between the solstices and the equinoxes. But that's not the case.

Kepler's laws of motion show that an orbiting body will sweep out equal areas in equal time. That means the object moves a little faster when it is close to its parent body, and moves a little slower when it is farther away from the parent. In other words, Earth will move slightly faster around perihelion (in January) than when it is at aphelion (in July). As a result, the time between the Northern Hemisphere's winter solstice (in December) and the spring equinox (in March) is a little less than the time between the Southern Hemisphere's winter solstice (in June) and the spring equinox (in September). The difference adds up to about five days.

Earth's distance from the sun changes slightly because its orbit is not perfectly circular but is instead slightly elongated, a feature known as an orbit's "eccentricity." But Earth's orbit is only slightly eccentric, so winter in the Northern Hemisphere is only five days shorter than it is in the Southern Hemisphere. But some of the other planets orbiting the sun have much higher eccentricities than Earth, and that can mean a bigger difference in how significantly the planet's arrival at perihelion and aphelion can affect global temperatures, according to NASA. On Mars, for example, the southern hemisphere winter is 24 days longer than it is in the northern hemisphere. Imagine how different life on Earth would be if that were the case here!