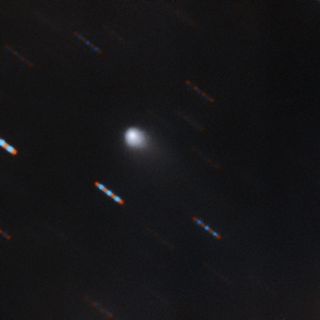 For the first time ever, astronomers have taken the detailed compositional measure of an interstellar interloper.

The gas cyanogen is streaming from Comet 2I/Borisov, the second confirmed interstellar object ever observed in our solar system, a new study reports.

Cyanogen, which consists of one carbon atom and one nitrogen atom bonded together, is common in native-born comets, suggesting that Borisov's origin may be the only truly exotic thing about it. And this latter notion is bolstered by other characteristics of the comet, the study team members said.

"Overall, we find the gas, dust and nuclear properties for the first active interstellar object are similar to normal solar system comets," the researchers wrote in the new study, which has been submitted to the Astrophysical Journal Letters. (You can read the manuscript for free at the online preprint site arXiv.org.)

Comet 2I/Borisov was discovered on Aug. 30 by amateur astronomer Gennady Borisov. Further observations over the next few weeks showed that the object comes from very far away; it is moving too fast, and at too odd an angle relative to the plane of the solar system, to be in orbit around the sun.

So, earlier this week, the International Astronomical Union officially declared Borisov our solar system's second confirmed interstellar visitor. The first, the mysterious object 'Oumuamua, zoomed through Earth's neighborhood in the fall of 2017 and soon became too faint to be studied further.

(Harvard astronomers Amir Siraj and Avi Loeb have identified another interstellar visitor as well — a meteor that burned up in Earth's atmosphere in January 2014. But that detection remains tentative, as the duo's paper is still in peer review.)

For the new study, a team led by astrophysicist Alan Fitzsimmons of Queen's University, Belfast in Northern Ireland observed Comet 2I/Borisov using the William Herschel Telescope in the Canary Islands.

"Our first attempt was on Friday 13 September, but we were unlucky and were thwarted by the brightness of the sky so close to the sun," Fitzsimmons said in a statement. "But the next attempt was successful."

That next try took place on Sept. 20, between 6 a.m. and 7 a.m. local time. (The Canary Islands, a Spanish chain that lies just off the coast of northwest Africa, are five hours ahead of U.S. EDT.)

"We received the data at midday, and by 5 p.m. that evening, we knew we had successfully detected gas for the first time," Fitzsimmons said. (Another research team recently obtained a broad spectrum of Borisov, which appeared to be similar to that of native-born comets, but did not identify any individual gases.)

The researchers also used a different instrument, the TRAPPIST-North telescope in Morocco, to quantify the dust being ejected by Comet 2I/Borisov. They then used this information to place constraints on the comet's size, determining that its nucleus is likely between 0.9 and 4.1 miles (1.4 to 6.6 kilometers) wide.

Borisov, therefore, is probably considerably larger than 'Oumuamua, which scientists think spans less than 0.5 miles (0.8 km) in its longest dimension. But 'Oumuamua's small size doesn't make the object any less interesting; indeed, the oddly shaped 'Oumuamua displayed weird "nongravitational acceleration" that has spurred speculation that it might be an alien spacecraft — specifically, one equipped with a lightsail.

There's another key difference between Comet 2I/Borisov and 'Oumuamua as well: The former object is still approaching the sun — it will make its closest pass by our star in early December — and will therefore be in astronomers' view for many months to come.

"The next year is going to be extremely exciting, as we will be able to follow 2I's evolution as it zooms through our solar system," study co-author Oliver Hainaut of the European Southern Observatory said in the same statement. "In comparison, we had only a few weeks to study 'Oumuamua before it became too faint."