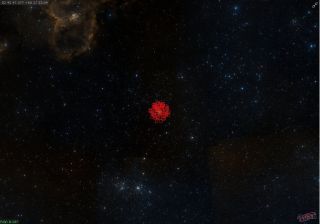 Observations of what scientists believe to be the first interstellar comet ever identified.
(Image: © IAC/Miquel Serra-Ricart)

Astronomers are rushing to study what appears to be the first known interstellar comet — and in some of the very earliest observations, it looks oddly familiar.

The object, currently dubbed Comet C/2019 Q4, was first spotted on Aug. 30. Follow-up observations of its path suggest that the comet is skimming through our neighborhood on a one-way journey, not trapped in the looping orbit typical of objects born in our own solar system. That would make it only the second confirmed interstellar object, after 'Oumuamua, which was spotted in 2017.

But scientists couldn't get a good read on what 'Oumuamua was made of. With this object, however, they can get such readings, by measuring the light signature of the gunk surrounding the comet. Some of the first of those spectra for C/2019 Q4 are in, and they look pretty similar to the spectra of a class of objects in our solar system. This suggests that those objects and the interstellar visitor consist of more or less the same stuff.

The Oort Cloud is the spherical shell of icy bodies encasing our solar system at huge distances from the sun. We see comets when they get kicked out of the Oort Cloud and travel closer to the heart of our solar system. They grow their trademark fuzzy tails when the sun's radiation vaporizes the more volatile ingredients of the comet.

Scientists have spotted comets ricocheting across other solar systems before, but the objects are tricky to study across such vast distances. While 'Oumuamua was definitely interstellar, it didn't carry the telltale cometary blur. The newly spotted object does, and that's what Licandro and colleagues at the Institute for Astrophysics of the Canaries were able to study.

The team used a telescope in the Canary Islands to image the comet on Sept. 12 and applied an installed instrument to gather three spectra as well. Initial analyses of those spectra suggest that they align somewhat with those of a specific group of solar system objects. That could mean that the solar system where the object came from follows a recipe fairly similar to that of our own solar system and its comets.

And scientists have plenty of time to gather the many observations they'll need to better understand what the comet is made of and where it came from. Unlike when 'Oumuamua was discovered, astronomers believe they still have a full year during which they can observe the comet from Earth.