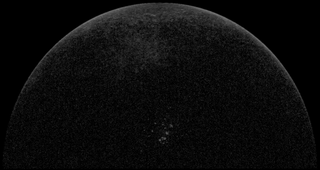 There are no hurricanes on Mercury, but there is plenty of water ice — and observing that ice can help scientists deal with the lingering effects of a very terrestrial hurricane.

When Hurricane Maria hit Puerto Rico in September 2017, the storm's powerful winds battered the island. Astronomy facility Arecibo Observatory, tucked in the forest, wasn't exempt from the damage: The winds warped and punched holes in the delicate panels that make up the observatory's receiving dish. Repairs will be slow and expensive; in the meantime, astronomers want to understand the data that they can get right now — so they turned to an old friend of the instrument, the tiny planet Mercury.

"Because we studied Mercury so well in the past, we can do it again today and then compare," Edgard Rivera-Valentín, a staff scientist at the Lunar and Planetary Institute of the Universities Space Research Association who worked at Arecibo Observatory when Maria hit, told Space.com. "That will let us understand better how the hurricane changed the ability of the dish to focus the radar, the signal that's being received."

The signal being received is the light that bounces off an object in space that Arecibo Observatory targets with a beam of light. Scientists can use the radar echo to understand characteristics like the shape, rotation speed and composition of an object in space.

Right now, the observatory spends most of its planetary-science-radar time on near-Earth asteroids, gathering data that lets scientists calculate, among more academic questions, the risks of a collision with our planet. "That's something that we do on a daily basis because there's so many of those things coming by Earth," Rivera-Valentín said.

Planets are trickier to observe, since astronomers need to time sessions based on when they can get good radar data from these more-distant objects. Arecibo can spot Mercury about 20 days of the year, Rivera-Valentín said. Other targets are less cooperative. "I think the next time we can zap Saturn is 2032," he said.

Planetary-radar observations from Earth have become a little less crucial to science as space agencies have built more and more missions to visit other worlds directly. But spacecraft can't do it alone; Rivera-Valentín said that even now, NASA vets potential Mars-landing sites with radar data, which can show what's going on just below the surface.

"Radar lets us see the past and the present of the planet," Rivera-Valentín said. "It works really nicely with us sending missions to [other worlds]; it helps the missions prepare for what they're about to see and it helps them prepare for where to be looking."

But despite taking extensive observations in the 1990s, Arecibo Observatory hadn't had cause to study Mercury with radar in detail since the early 2000s, Rivera-Valentín said. It took a combination of factors to inspire him and a postdoc to turn the facility's beam back to the tiny planet in July 2019.

One key motivation was mission schedules. The last spacecraft to study Mercury, NASA's Messenger mission, did so from 2011 to 2015, after the last spate of radar observations. The next, a joint project between the European Space Agency and the Japan Aerospace Exploration Agency called BepiColombo, is currently making the long journey to the tiny planet. That combination means that radar studies done now can draw on orbital data gathered by Messenger and pave the way for BepiColombo to plan its own observations before arriving in December 2025.

In particular, Rivera-Valentín wanted radar's perspective on craters on Mercury. Studying the moon, scientists have realized that craters look different in radar data depending on when they formed; newer craters appear brighter than older ones. So he wants to know whether the same pattern holds on Mercury, in hopes of guiding the BepiColombo team toward more compelling sites.

And then there's the matter of Maria. "I was there during the hurricane and I got to see everything," Rivera-Valentín said. "The winds were ridiculously strong." More than two years later, Arecibo Observatory and the rest of the island are still recovering from the damage.

In the case of the observatory, the main issue is the dish itself, a massive bowl of delicate panels built into a natural sinkhole. "You suddenly have these very high winds, well, that's going to start altering these panels and that'll change the shape of the dish, Rivera-Valentín said. "We rely really precisely on that shape being very close to exact, nearly a sphere, so that we can better focus light."

It's not the sort of damage that can be fixed quickly, either. The observatory and the University of Central Florida, which runs it, have begun the process of getting the repairs done, which will in turn put the observatory out of operations again. But until then, scientists need to get what they can from the instrument — and that's where the new Mercury observations can help.

By gathering calibration data about Mercury now and comparing it to older observations, astronomers can understand how precisely the dish's damage is affecting its measurements. Then, they can apply that information to the asteroid observations that are a higher priority for Arecibo.

The observations can't erase the hurricane's immense toll on the island and the observatory — but the distant ice at least offers scientists a tool to make use of what radar data they can gather.