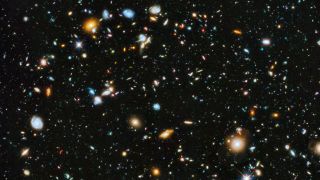 A look at our expanding universe from the Hubble Space Telescope's Ultra Deep Field.
(Image: © NASA/ESA/Hubble/STScI)

Scientists have come up with a new measurement for the expansion rate of the universe, leading to questions regarding the discrepancies between current observations and the model of the universe that astronomers have relied on for years.

New observations made using the Hubble Space Telescope indicate that the universe is expanding at the rate of just under 43 miles per second (70 kilometers per second) per megaparsec, a distance equivalent to 3.26 million light-years.

To measure the universe's expansion rate — a number known as the Hubble constant — astronomers typically look at stars and galaxies to see how fast they seem to be moving apart. The Planck measurement, on the other hand, is based on the cosmic microwave background, or leftover radiation from the Big Bang. By looking for these "echoes" of the Big Bang, Planck provided clues about what the universe looked like in its infancy and enabled predictions of how the universe would have likely evolved to reach its current expansion rate, Hubble scientists said in a statement.

The new study puts into question predictions made about the universe that have in turn formed our current models regarding the universe's age, its origin and how it will evolve over time.

"The Hubble constant is the cosmological parameter that sets the absolute scale, size and age of the universe," Wendy Freedman, a professor of cosmology at the University of Chicago and lead author of the new study, said in the statement. "It is one of the most direct ways we have of quantifying how the universe evolves."

"This new evidence suggests that the jury is still out on whether there is an immediate and compelling reason to believe that there is something fundamentally flawed in our current model of the universe," Freedman said.

Earlier in 2001, Freedman led another study that used distant stars called Cepheid variables to measure the Hubble constant at 45 miles per second per megaparsec (72 km/s/Mpc). Cepheid variables are pulsating stars that rapidly vary in brightness over time, and astronomers can determine their distances from Earth based on their changing luminosity.

However, this new study used red giant stars in nearby galaxies to measure the expansion rate. Red giants are nonvariable stars that all reach the same peak luminosity toward the end of their life cycle. Measuring the brightness of red giant stars at this stage of stellar evolution can help scientists figure out their distance, according to the statement.

Freedman's team chose this different approach to measuring the Hubble constant in hopes of figuring out why earlier measurements using other methods have been so inconsistent. "Our initial thought was that if there's a problem to be resolved between the Cepheids and the cosmic microwave background, then the red giant method can be the tie-breaker," Freedman said.

"Naturally, questions arise as to whether the discrepancy is coming from some aspect that astronomers don't yet understand about the stars we're measuring, or whether our cosmological model of the universe is still incomplete," Freedman said. "Or maybe both need to be improved upon."

The study was accepted for publication in The Astrophysical Journal.