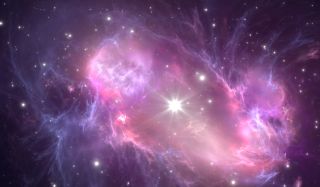 There may be an exotic form of dark energy lurking in the universe, and it could explain a stubborn discrepancy in measurements of the universe's expansion rate.

This so-called early dark energy might have existed in the universe’s infancy, then flickered out of existence soon after. That, in turn, would explain why expansion rates disagree.

Dark energy is the unknown, mysterious form of energy that permeates space, flinging the universe outward at faster and faster speeds. But in the past two decades, scientists who study the universe's accelerating expansion have found two very different rates. The universes' first light — the cosmic microwave background radiation or CMB — suggests a lower rate for the expansion of space than do studies of supernovas and pulsating stars in the nearby universe. In other words, the universe seems to be expanding faster now than would be predicted by how it looked in the early history, shortly after the Big Bang. [From Big Bang to Present: Snapshots of Our Universe Through Time]

This disagreement has been termed the "Hubble tension." Because the the CMB rate is at odds with other estimates, and since its calculation relies on cosmological models, it's thought that something must be missing from the model — such as new laws of physics or unknown types of matter.

A new paper, published June 4 in the journal Physical Review Letters, proposes that early dark energy could be the missing piece that altered the universe's early expansion rate. If so, this early dark energy would have subtly affected the way that CMB looks, explaining why the measured expansion is lower than expected. Future high-resolution observations of the CMB might be able to show if early dark energy really did exist in the young universe.

"The role of this early dark energy is to affect the expansion rate around 100,000 years after the Big Bang," Vivian Poulin, lead author on the new paper and researcher at Laboratoire Univers et Particules de Montpellier, a division the French National Center for Scientific Research in France, told Live Science. "Back at that time, [early dark energy] would have accounted to up to 10% of the total energy density in the universe."

The proposed early dark energy wouldn't have lasted long — likely decaying away after just a few hundred thousand years. In the early universe, this dark energy would have functioned like an earlier, temporary cosmological constant — the unknown factor that is used to explain the current accelerating expansion of our universe, as well as the expansion right after the Big Bang. Once it disappeared, however, the universe’s expansion rate would have become defined again by the modern cosmological constant — current dark energy.

"There are many models on the market which could produce [early dark energy]," Poulin told Live Science. "The one we suggested is inspired by string theory."

The scientists will keep studying the ramifications of early dark energy on the formation of the universe, including on the large-scale structures of galaxies. Upcoming missions, like the Large Synoptic Survey Telescope and the Euclid telescope, might be able to directly test for signs of early dark energy in as little as five years, Poulin said.

"I think it is very important to think about novel ways in which the tension could be resolved, as these authors are doing," Wendy Freedman, astronomer at the University of Chicago who was not involved with the new work, told Live Science. "Ultimately this will be resolved empirically with higher accuracy data. And experiments and programs now in development over the next several years should be able to test these models and settle this question decisively."