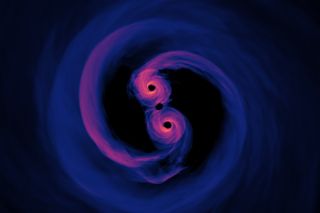 Future spaceships could use black holes as powerful launch pads to explore the stars.

A new study envisions firing laser beams that would curve around a black hole and come back with added energy to help propel a spacecraft to near the speed of light. Astronomers could look for signs that alien civilizations are using such a "halo drive," as the study dubs it, by seeing if pairs of black holes are merging more often than expected.

Study author David Kipping, an astrophysicist at Columbia University in New York, came up with the idea of the halo drive through what he calls "the gamer's mindset."

"Sometimes, in a computer game you find an 'exploit,' a hack which allows you to do something overpowered that would otherwise be forbidden by the rules of the game," Kipping told Space.com. "In this case, the game is the physical world, and I tried to think about exploits that would allow a civilization to achieve relativistic flight back and forth across the galaxy without the vast energy expense that one might naively assume."

A key challenge to using rockets to fly through space is that the propellant they carry with them has mass. Long trips need a lot of propellant, which makes the rockets heavy, which in turn requires more propellant, making the rockets even heavier, and so on. That problem gets exponentially worse the bigger the rocket gets.

Instead of carrying propellant for propulsion, however, spacecraft equipped with mirror-like sails could rely on lasers to push them outward. The $100 million Breakthrough Starshot initiative, announced in 2016, plans to use powerful lasers to propel swarms of spacecraft to Alpha Centauri, the closest star system to our own, at up to 20 percent the speed of light.

The spacecraft that Breakthrough Starshot aims to launch are each only about the size of a microchip. In order to accelerate larger spaceships to relativistic speeds — to a significant fraction of light speed — Kipping sought the aid of gravity.

Spacecraft now regularly use "slingshot maneuvers," in which the gravity of a body, such as a planet or moon, hurls the vessels across space and boosts their speed. In 1963, famed physicist Freeman Dyson suggested that spaceships of any given size could rely on slingshot maneuvers around compact pairs of white dwarfs or neutron stars to fly at relativistic speeds. (Dyson came up with the notion of what became known as a Dyson sphere, a megastructure that encapsulates a star to capture as much of its energy as possible to power an advanced civilization.)

However, a "Dyson slingshot" runs the risk of damaging a spacecraft through extreme gravitational forces and hazardous radiation from those pairs of dead stars. Instead, Kipping suggests that gravity might assist spaceships by increasing the energy of laser beams fired at the edges of black holes.

In 1993, physicist Mark Stuckey suggested that a black hole could, in principle, act like a "gravitational mirror," in that the black hole's gravity could slingshot a photon around so that it flew back at its source. Kipping calculated that if a black hole was moving toward a photon's source, the "boomerang photon" would siphon away some of the black hole's energy.

Related: No Escape: Dive into a Black Hole (Infographic)

Using what he called a "halo drive" — named for the ring of light it would create around a black hole — Kipping found that even spaceships with the mass of Jupiter could achieve relativistic speeds. "A civilization could exploit black holes as galactic waypoints," he wrote in a study accepted by the Journal of the British Interplanetary Society and detailed online Feb. 28 in the arXiv preprint server.

The faster a black hole moves, the more energy a halo drive could draw from it. As such, Kipping largely focused on using pairs of black holes spiraling toward each other before a merger.

Astronomers could look for signs that alien civilizations are exploiting pairs of black holes for travel with such an engine. For example, halo drives would effectively steal energy from such binary black hole systems, increasing the rates at which pairs of black holes merge above what one would expect to see naturally, Kipping said.

The major drawback of a halo drive would be that "one has to travel to the nearest black hole," Kipping said. "It's akin to paying a one-time toll fee to ride the highway system. You have to pay some energy to reach the nearest access point, but after that, you can ride for free as a long as you like."

The halo drive works only in close proximity to a black hole, at a distance of about five to 50 times the black hole's diameter. "This is why you have to travel to the nearest black hole first and [why you] can't simply do this across light-years of space," Kipping said. "We still first require a means to travel to nearby stars to ride the highway system.

"If we want to achieve relativistic flight, it takes immense energy levels no matter what propulsion system you use," he added. "One way to get around this is to use astronomical objects as your power source, since they possess literally astronomical levels of energy within them. In this case, the black-hole binary is essentially a giant battery waiting for us to tap it. The idea is to work with nature and not against it."

Kipping is now investigating ways to exploit other astronomical systems for relativistic flight. Such techniques "may not be quite as efficient or fast as the halo-drive approach, but these systems possess the deep energy reserves needed for these journeys," Kipping said.