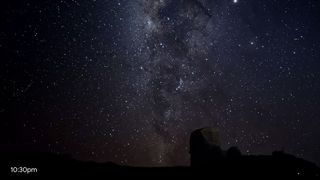 A photo of the night sky taken by the Google Pixel 4.
(Image: © Google)

Smartphone-wielding astronomy buffs can photograph the night sky in more detail than ever using the new Google Pixel 4, the tech company claims.

The phone's upgraded Night Mode "allows you to take bright, clearer pictures of the night's sky for enhanced visuals of stars, the moon and galaxies," Google said in a statement.

As any astrophotographer knows, using a cell phone to capture pictures of stars and other faint objects is an immense challenge. Good exposures require lots of light and lots of exposure time, and traditionally, cell-phone photographers have suffered from small lenses and shaky images.

Related: How to Snap Awesome Night-Sky Photos with Your Smartphone

During a presentation last month at the company's Made By Google '19 event, however, professor Marc Levoy from Google Research showed off pictures of the Milky Way, stars and other faint objects taken with a carefully placed Pixel 4.

"That has always been sort of a Holy Grail, for me," he said of the shots, which sparked applause from the audience. "Night Sight has been called everything from fake to sorcery. Well, it's neither."

The process to take the exposures is fairly simple, according to Google. First, make sure you are well away from any light-polluted areas. Use a tripod (or a well-placed rock) and tell the phone to do a shutter press for four minutes. The phone will take 15 exposures automatically, accounting for  movement such as star rotations and wind moving the trees. However, any people who are in a photo will need to sit still for the exposures (just like in old daguerreotype photography).

The phone also includes machine learning for automatic white balancing (which keeps dark areas from being too dark and white areas from being too white) and something called "semantic segmentation" that can darken skies in Night Sight. The phone, however, is unable to handle the dynamic contrast difference between a full moon and a moonlit landscape in the same shot.

The full moon is roughly half a million times brighter than the landscape and no consumer camera can photograph such an extreme contrast in brightness in one shot yet. Levoy added, "Pixel is committed to making its cameras better with software updates, so stay tuned on this one."

The Night Sight mode, however, is not unique to Google, as Apple and Huawei display similar strength in their own handsets, Space.com's sister site TechRadar notes in a review. While the camera on the Pixel 4 is much improved from previous versions, the battery life is "mediocre at best," TechRadar warns. So, it might be prudent to bring some extra battery packs for your phone, especially during cold evenings that tend to drain battery life.

Without a phone plan, the outright price for the Pixel 4 in the United States starts at $799 for the 64GB of storage model and $899 for the 128GB Pixel 4. Model availability varies by market, however (for example, United Kingdom residents cannot access the 128 GB orange variant.)