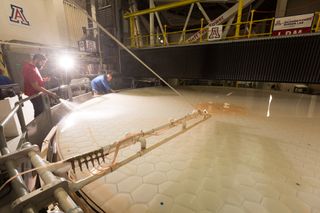 Technicians at the University of Arizona's Richard F. Caris Mirror Lab have finished polishing the front surface of a second 27.6-foot-wide (8.4 meters) GMT mirror, a precise and exacting process that took 10 months.

The completed mirror was transported from the lab to a temporary storage facility at the Tucson Airport, joining mirror segment No. 1, Giant Magellan Telescope (GMT) officials announced today (July 31).

The GMT is taking shape on a mountaintop in the Chilean Andes. The telescope will feature seven primary mirrors, which together will create a light-collecting surface 80 feet (24.5 m) wide. The powerful scope will allow astronomers to investigate some of the cosmos' deepest mysteries — the nature of dark matter and dark energy, for example, and whether Earth life is alone in the universe.

The seven GMT primary mirrors are a marvel of engineering. Each one takes years to make, from the initial casting in a big, rotating furnace through multiple stages of grinding and polishing. The surfaces of the completed mirrors are perfect to within 25 nanometers — about 1 millionth of an inch.

Three of the remaining five primary mirror segments have been cast and are in various stages of processing at the Richard F. Caris Mirror Lab. The remaining two are expected to be be cast in 2020 and 2021.

GMT will probably begin operations with just four or five of the primary mirrors installed, project representatives have said. That's expected to happen in 2026, and the scope should be at full strength by 2028.

The primary mirrors are too big to fit in a plane, so they will eventually be shipped to Chile by sea, through the Panama Canal. They'll leave via the Port of Houston, GMT representatives said.

GMT is one of three megascopes expected to come online in the mid-2020s. The Extremely Large Telescope will observe the heavens from Chile as well, whereas the Thirty Meter Telescope will be built on Hawaii's Mauna Kea volcano.

"These observatories are going to last 50 years," Shelton told Space.com a few months ago.