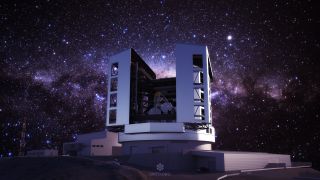 The bones of a huge next-generation telescope now have a builder.

The organization managing the development of the Giant Magellan Telescope (GMT) has signed a $135 million contract with MT Mechatronics and Ingersoll Machine Tools to construct and install the project's precision steel structure.

The 1,800-ton structure is the multipurpose skeleton of the GMT, which is under construction in the Chilean Andes. It will hold the telescope's mirrors and allow the big observatory to track celestial objects smoothly across the sky, GMTO Corp. representatives said.

"Manufacturing the telescope structure is one of the biggest steps we will take on our journey to building the Giant Magellan Telescope," GMTO President Robert Shelton said in a statement today (Oct. 30).

The steel structure will likely arrive in Chile in 2025 and be ready to accept mirrors by 2028, project team members said. GMT is now expected to open its eyes in 2029 — a few years later than previously planned. ("First light" had been targeted for the mid-2020s.)

The GMT will integrate seven primary mirrors into a single light-collecting surface 80 feet (24.5 meters) wide. The telescope will ultimately be able to capture photos 10 times sharper than those snapped by NASA's iconic Hubble Space Telescope, GMTO representatives have said.

The GMT will be a powerful, multipurpose science machine, allowing researchers to hunt for signs of life in the atmospheres of nearby alien planets and probe the nature of mysterious dark energy and dark matter, among other big-ticket topics.

Building such a big, complicated observatory is an exacting and time-consuming process. For example, each of the 27.6-foot-wide (8.4 m) primary mirrors takes years to complete, from the initial casting through the grinding and polishing that make their surfaces perfect to within 25 nanometers (about 1 millionth of an inch).

The mirrors are being built at the University of Arizona's Richard F. Caris Mirror Lab. Two of them are  finished, and three have been cast and are in various stages of processing. Mirrors six and seven are expected to be cast in 2020 and 2021.

And getting these big optics down to Chile is no picnic, either. The primary mirrors are too big to fit on a plane, so they must go by sea, shipping from Houston and going through the Panama Canal.

When it's finished, the steel structure — complete with mirrors and telescope instruments — will weigh 2,100 tons. The entire thing will float on a layer of oil just 50 microns (0.002 inches) thick, allowing the GMT to track cosmic objects across the sky smoothly, without much interference from friction.

GMT is one of three ground-based megascopes that aim to get up and running in the 2020s. The Extremely Large Telescope is being built in the Chilean Andes as well, and the Thirty Meter Telescope (TMT) will observe the heavens from Hawaii's Mauna Kea volcano. (That's the plan, anyway. Native Hawaiians regard Mauna Kea and other peaks throughout the archipelago as sacred, and the TMT project has faced considerable opposition from local activists voicing concerns about the observatory's cultural and environmental impact.)