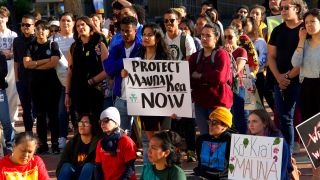 Unidentified activists gather at Sproul Plaza to protest in solidarity with the activists in Hawaii to protect Mauna Kea from the building of a thirty-meter telescope atop the volcano, which is considered a sacred site.
(Image: © Sheila Fitzgerald/Shutterstock)

Hundreds of activists outside of the Thirty Meter Telescope (TMT) on Mauna Kea in Hawaii have caused the 13 observatories on the mountain to cease operations, according to Nature.

Mauna Kea is a dormant volcano on the Big Island of Hawaii that is highly sacred to Native Hawaiians, and is an integral part of Hawaiian traditions. It also happens to be an ideal site for astronomy.

After four years of delays caused by both legal complications and peaceful protests, the Hawaii supreme court ruled that the TMT construction permit was valid and work on the observatory was scheduled to resume this past week (July 15). But before construction resumed, protesters flocked to the site to peacefully oppose the construction with songs, signs and speakers.

"It is without a doubt one of our most sacred places in all of Hawaii," protest leader Kaho'okahi Kanuha told CNN. "We are taking a stand not only to protect our mauna and aina, our land, who we have a genealogical connection to … We are fighting to protect it because we know if we cannot stop this, there is not very much we can fight for or protect … This is our last stand," he said.

On July 17, police took 33 Native Hawaiian elders, known as kupuna, into custody and released them shortly thereafter. Despite ongoing opposition, astronomers at existing observatories on the volcano, as well as those awaiting construction of the TMT, hope to come to an agreement that respects the concerns of the protesters.

"I know Mauna Kea is a sanctuary for Hawaiians, so I hope [for] a peaceful settlement for both sides as quickly as possible," Mihoko Konishi, an astronomer at Oita University in Japan who had planned to use the Subaru Telescope on Mauna Kea this past week, said, according to a statement.

While astronomers are empathetic to the protest, they hope to reach a compromise.

"We recognize that people have expressed strong emotions about that, and we regret that," TMT spokesperson Scott Ishikawa said in a statement to CNN. "We've been part of the Hawaii Island community for over 10 years, and we have tried to do the right thing, with consideration for the environment, the culture, the economy and the future of Hawaii Island. But we know that TMT has become a symbol for larger issues within the native Hawaiian community. While we haven't been privy to the State's security or enforcement plans, like everyone else in Hawaii, we want to find a way forward that is safe for everybody."

The $1.4 billion TMT, named for its 98-foot (30-meter) diameter prime mirror, is designed to use advanced spectroscopy and imaging to improve ground-based observations of the universe. Observing in wavelengths from ultraviolet to infrared, TMT is designed to have a resolution 12 times sharper than the Hubble Space Telescope, project officials have said.

Currently, astronomers from around the world use 13 telescopes, which are housed at 12 facilities, at or near the summit of Mauna Kea. This site, sacred to those native to Hawaii, is continuously chosen for observatories like the TMT for a few reasons. At a staggering altitude of 2.5 miles (4.05 kilometers), the atmosphere above the mountain is extremely dry, which is ideal for measuring infrared and submillimeter radiation.

A tropical inversion cloud layer separates the dry upper atmosphere from the air down below. The site's exceptionally stable atmosphere and lack of clouds allow for more detailed observations. The site is also far from city lights (thanks in part to a light ordinance on the island), making light pollution almost a non-issue, according to the Institute for Astronomy at the University of Hawaii.