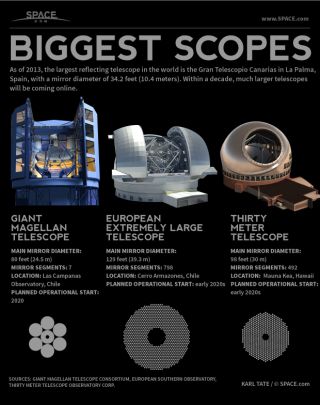 As of 2013, the largest reflecting telescope in the world is the Gran Telescopio Canarias in La Palma, Spain, with a mirror diameter of 34.2 feet (10.4 meters). Within a decade, much larger telescopes will be coming online.

The main mirror of the Giant Magellan Telescope will be 80 feet (24.5 m) in diameter and is composed of 7 segments. The telescope is being built at Las Campana Observatory, Chile and is planned to be operational in 2020. [Stacking Up the 10 Biggest Telescopes on Earth]

The primary mirror for the European Extremely Large Telescope will be 129 feet (39.3 m) in diameter and is composed of 798 segments. It is being built at Cerro Armazones, Chile and is planned to be operational in the early 2020s. [Photos: World's Largest Telescope Being Built in Chile]

Meanwhile, the planned Thirty Meter Telescope will have a main mirror is 98 feet (30 m) in diameter and is composed of 492 segments. It is being built at Mauna Kea, Hawaii and is planned to be operational in the early 2020s.