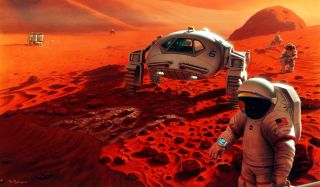 This image shows an artist's depiction of a crewed mission to Mars. Geneticist Chris Mason recently sat down with Space.com to discuss the possibility of one day genetically engineering humans to protect them against the dangers of space travel and life on Mars.
(Image: © NASA/Pat Rawlings, SAIC )

Will we one day combine tardigrade DNA with our cells to go to Mars?

Chris Mason, a geneticist and associate professor of physiology and biophysics at Weill Cornell University in New York, has investigated the genetic effects of spaceflight and how humans might overcome these challenges to expand our species farther into the solar system. One of the (strangest) ways that we might protect future astronauts on missions to places like Mars, Mason said, might involve the DNA of tardigrades, tiny micro-animals that can survive the most extreme conditions, even the vacuum of space!

Mason led one of the 10 teams of researchers NASA chose to study twin astronauts Mark and Scott Kelly. After launching in 2015, Scott Kelly spent almost a year aboard the International Space Station while his twin brother, Mark Kelly, stayed back on Earth.

By comparing how they biologically reacted to their vastly different environments during that time, scientists aimed to learn more about how long-duration missions affects the human body. Mason and the dozens of other researchers who worked to assess the genetic effects of spaceflight uncovered a wealth of data that has so far revealed many new findings about how space affects the human body.

Researchers hope that this work, which continues today, might inform strategies to support astronaut health on future missions. Mason discussed some of the results of this research at a talk at the 8th Human Genetics in NYC Conference on Oct. 29.

In addition to the research Mason discussed at the conference, these researchers are working on seven more papers incorporating the data from the twins study. However, they also hope to use new data from a larger sample.

"We want to do some of the same studies, longitudinal studies, with people on Earth, people in space," Mason told Space.com at the conference.

By studying, specifically, how certain genes are expressed during the different stages of spaceflight (including the intense return to Earth), these research efforts could support future efforts to mitigate the dangers of spaceflight, Mason said.

For instance, if further studies were to confirm that landing back on Earth were harmful to the human body, scientists could develop ways to prevent those detrimental effects. But with such a small body of data (the twins study was just two people), scientists aren't ready to prescribe any specific treatment or preventative medicine to alter how humans genetically react to spaceflight.

"I think we do what is normally done in science … We see something interesting; let's try it in mice first," Mason said.

He noted that they might not even find it necessary to prescribe anything to alter the effects they've seen in astronauts like Scott Kelly. "Some of those changes, even though they're dramatic, maybe that's how the body needed to respond," Mason said.

While, Mason noted, future astronauts might be prescribed medicine or other tools to help to mitigate the effects which they've uncovered with this research. However, new studies are investigating how tools such as gene editing could make humans more capable of traveling farther into space and even to planets such as Mars.

One of the main health concerns with space travel is radiation exposure. If, for example, scientists could figure out a way to make human cells more resilient to the effects of radiation, astronauts could remain healthier for longer durations in space. Theoretically, this type of technology could also be used to combat the effects of radiation on healthy cells during cancer treatments on Earth, Mason noted.

However, the idea of tinkering with human genes is controversial. But Mason emphasized that there will likely be decades of research completed before this kind of science is applied to humans.

"I don't have any plans of having engineered astronauts in the next one to two decades," Mason said. "If we have another 20 years of pure discovery and mapping and functional validation of what we think we know, maybe by 20 years from now, I'm hoping we could be at the stage where we would be able to say we can make a human that could be better surviving on Mars."

But what does it mean to genetically engineer a person to better survive in space or on another planet? There are multiple possible approaches.

One way that scientists could alter future astronauts is through epigenetic engineering, which essentially means that they would "turn on or off" the expression of specific genes, Mason explained

Alternatively, and even more strangely, these researchers are exploring how to combine the DNA of other species, namely tardigrades, with human cells to make them more resistant to the harmful effects of spaceflight, like radiation.

This wild concept was explored in a 2016 paper, and Mason and his team aim to build upon that research to see if, by using the DNA of ultra-resilient tardigrades, they could protect astronauts from the harmful effects of spaceflight.

Genetically editing humans for space travel would likely be a part of natural changes to the human physiology that could occur after living on Mars for a number of years, Mason said. "It's not if we evolve; it's when we evolve," he added.

While changes to the human body are to be expected as our species expands off-Earth, there is a way to do this science responsibly, Mason said. "In terms of a question of liberty, you're engineering it [a future human] to have lots more opportunities, again assuming we haven't taken away opportunities," he said. "If we learned that, in some way, when we decided to try and prove the ability of humans to live beyond Earth, and we take away their ability to live on Earth, I think that would be unjust."

Genetically engineering humans could be ethical if it makes people more capable of inhabiting Mars safely without interfering with their ability to live on Earth, Mason said.