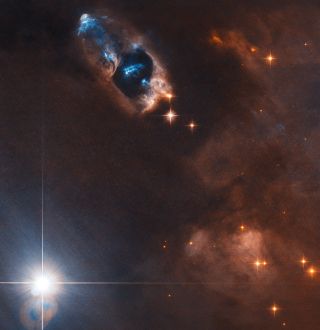 The five objects HH 7-11, in blue at the top center of the image, reside in the nebula NGC 1333. The objects are transient bright patches of gas created by a newborn star.
(Image: © K. Stapelfeldt/ESA/Hubble/NASA)

Young stars can hide, but Hubble's good at seeking them out. The famed space telescope spotted the "smoking gun" of a newborn star about 1,000 light-years from Earth.

The new image shows strange celestial formations called Herbig-Haro objects, which are bright patches of gas (nebulosity) that reside near newborn stars, according to a statement from NASA. In cosmic terms, these things dissipate very quickly. In just a few tens of thousands of years, they will jet away from the star at speeds of up to 150,000 mph (240,000 km/hr).

The five Herbig-Haro objects are visible in blue at the top center of the image, near their host star. SVS 13. The current distance between one of these objects (called HH7) and SVS 13 is about 20,000 times the distance between Earth and the sun. For perspective, the dwarf planet Pluto in our own solar system has an average distance of about 40 Earth-sun distances, or astronomical units.

"Herbig–Haro objects are formed when jets of ionized gas ejected by a young star collide with nearby clouds of gas and dust at high speeds," the European Space Agency said in a statement posted on NASA's website. "The Herbig-Haro objects visible in this image are no exception to this, and were formed when the jets from the newborn star SVS 13 collided with the surrounding clouds. These collisions created the five brilliant clumps of light."

Young star systems are often obscured by gas and dust, making them difficult to see even with Hubble's powerful visible-light and infrared eyes. Fortunately, ground systems such as the Atacama Large Millimeter/submillimeter Array (ALMA) are optimized to peer through the debris to see young star systems under formation. Astronomers are interested in the birth, life and death of stars to learn more about stellar evolution and, at a larger scale, how galaxies evolve.

Hubble launched on a space shuttle in 1990 and has made numerous scientific discoveries, including evidence that the universe's expansion is accelerating. After multiple servicing missions by astronauts, the telescope remains in good health and is expected to operate well into the 2020s. A successor mission called the James Webb Space Telescope is expected to launch in 2021.