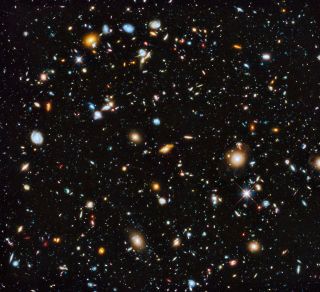 This image by the Hubble Space Telescope is the most comprehensive view yet of the universe's evolution as seen by a space telescope. The coloful image, released June 3, 2014, contains 10,000 galaxies, with the different colors denoting different wavelengths.
(Image: © NASA, ESA, H. Teplitz and M. Rafelski (IPAC/Caltech), A. Koekemoer (STScI), R. Windhorst (Arizona State University), and Z. Levay (STScI))

BOSTON — The Hubble Space Telescope has captured an amazing and colorful deep view of the universe, showing galaxies shining in ultraviolet light during their wild, star-forming "teenage" years.

The new image, which was released today (June 3), is the most comprehensive view of the evolving universe ever captured by the space telescope, Hubble representatives said. Hubble previously imaged the same patch of sky shown in the new image between 2004 and 2009 to create a super-detailed view known as the Hubble Ultra Deep Field.

The new Hubble telescope picture — a composite of exposures taken from 2003 to 2012 — is called the Ultraviolet Coverage of the Hubble Ultra Deep Field and contains about 10,000 galaxies, with the ultraviolet (UV) images rendered in blue. The image also extends very far back in time, capturing a snapshot of galaxies just a few hundred million years after the Big Bang. [The Universe: Big Bang to Now in 10 Easy Steps]

"The reason we want to do this is to study galaxies in what you might call their 'teenage years,' while they're still growing up," Harry Teplitz, the project's principal investigator and a researcher at the California Institute of Technology, told reporters here today at the 224th meeting of the American Astronomical Society.

"What we did that's new is that we took ultraviolet images, and the reason we want to study things in the ultraviolet is that it tells us about the youngest, most massive, hottest stars that are forming within galaxies," Teplitz added.

The new ultraviolet images could also help fill in a gap in scientists' knowledge about galaxies. In the past, Hubble has imaged distant, primitive galaxies that came into existence not long after the Big Bang using near-infrared capabilities, and scientists have been able to study nearby galaxies that have already "grown up."

But the period of galactic evolution between those two phases has remained mysterious. The new ultraviolet data could help clear up some of the mystery, Teplitz said.

"In between 5 [billion] and 10 billion years ago, when UV light was emitted, we've not had the facility to explore that range in the ultraviolet — so that's why we wanted to fill in the gap," he said. "To understand why that's important, it's sort of like having studied people or families by first studying infants, and then studying grown-ups after they've gone to college, but completely missing everything in between and not knowing about school."

By adding ultraviolet observations to the original Hubble image, scientists can now see star formation in galaxies as they are growing during their most productive years. Therefore, astronomers can potentially learn more about how galaxies grow and turn into what is seen today.

Hubble's successor, the James Webb Space Telescope, will get great looks at the universe in infrared light; however, it will not be able to obtain the ultraviolet data that Hubble collects. Scientists are therefore using Hubble to get more ultraviolet data in preparation for its successor.