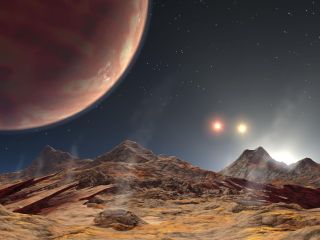 An artist's depiction of the view from a moon's surface of a gas giant and three suns. One new method might allow scientists to better study exoplanets and understand their atmospheres and whether or not they might be able to host life.
(Image: © NASA/JPL-Caltech)

A new method of studying alien planets might allow scientists to determine if two-planet systems "at the edge of chaos" could host life.

Since scientists first began observing exoplanets (short for extrasolar planets) in 1992, thousands more have been discovered. These distant worlds help scientists expand our understanding of the cosmos and tell us what, if any, life might exist beyond Earth. But, even though tools like NASA's Kepler space telescope and Transiting Exoplanet Survey Satellite (TESS) have made possible to discover many more exoplanets, scientists still face challenges when they try to determine the initial positions and velocities of exoplanets.

This is why Tamás Kovács, a theoretical physicist at the Hungarian Academy of Sciences in Budapest, decided to develop a new method for analyzing exoplanet systems. According to Kovács, this new method could allow scientists to determine whether a system of exoplanets might move or orbit "chaotically," meaning their movement changes often and might even appear to be random, or "regularly," meaning their movement repeats regularly and can be predicted.

Related: Meet Proxima b: The Closest Exoplanet We Know (Infographic)

Understanding whether an exoplanet system is "chaotic" or "regular" is important, because, as Kovács told Space.com, this movement can affect the atmosphere and conditions on that planet. Determining whether or not an exoplanetary system is chaotic could not only tell scientists more about the exoplanets in the system but also tell them whether or not those planets might be capable of supporting life, Kovács added.

"We can say that if the dynamics are chaotic or irregular, then there is less chance to observe life," Kovács said.

Kovács' method is unique in that it uses only observed time-series data, or data from observations of exoplanetary motion.

"If we don't know the governing equations of the motion of a system, and we only have the time series — what we measure with the telescope — then we want to transform that time series into a complex network," Kovács said in a statement. The new study stems from earlier work by physicist Floris Takens in 1981, who proposed that scientists could determine the dynamics and movement of a planetary system through observations.

Using a time delay with this time-series data, Kovács was able to construct a trajectory of movement in a planetary system and track recurring points, following and analyzing the movement of the bodies in the system. Kovács tested this method with Saturn, Jupiter and the sun to see if it was reliable and aligned with what we already know about these planets.

The test aligned with existing knowledge, so Kovács went on to apply his method to the two-planet exoplanetary system containing Kepler-36b and Kepler-36c, which orbit the star Kepler-36. This system is described in the statement as being "at the edge of chaos" because, as was shown by earlier studies and repeated with Kovács' method, the system uniquely exhibits both chaotic and regular dynamics.

Kovács told Space.com that he aims to continue to test his method and hopefully expand it by applying it to larger systems with more than two exoplanets.