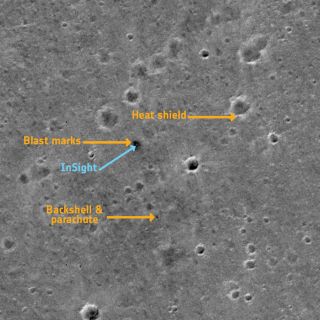 A photo captured by the European Space Agency's ExoMars orbiter shows NASA's InSight lander and the equipment that helped it to reach the surface safely.
(Image: © ESA/Roscosmos/CaSSIS, CC BY-SA 3.0 IGO)

To mark the three-year anniversary of the Trace Gas Orbiter's arrival at Mars, the European Space Agency (ESA) has released a stunning image it captured earlier this month of NASA's InSight lander.

InSight touched down on Mars on Nov. 26 and has been at work ever since deploying its instruments and beginning to gather data. During the landing and since its arrival, a host of orbiters have checked in on the robot; ESA's ExoMars mission is the latest to spot InSight.

"The ExoMars Trace Gas Orbiter is being used to relay data from InSight to Earth," Nicolas Thomas, principal investigator for the camera that captured the image and a planetary imaging specialist at the University of Bern in Switzerland, said in a statement. "Because of this function, to avoid uncertainties in communications, we had not been able to point the camera towards the landing site so far — we had to wait until the landing site passed directly under the spacecraft to get this image."

The image itself shows not just the lander, but also the equipment that helped it navigate the tricky journey to the Martian surface, including its heat shield, backshell and parachute. The image also shows a dark area around the lander caused by the retro rockets that slowed its landing.

ESA is looking at its own impending Mars landing in March 2021. That will be the second ExoMars mission and will include a rover named for crystallographer Rosalind Franklin; the rover is designed to look for traces of life in the top 6.5 feet (2 meters) of rock. Once that rover arrives, the Trace Gas Orbiter will attempt to support it as it does InSight, by taking images of the rover and relaying signals back to Earth.