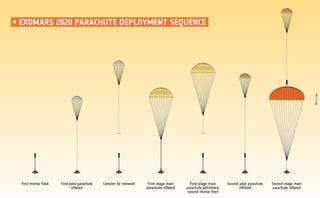 There’s concern that the European-Russian ExoMars 2020 mission could become ExoMars 2022.

The issue involves parachute testing and a series of snags encountering while trying to flight-qualify the descent system. The ExoMars team continues to troubleshoot the parachute design following an unsuccessful high-altitude drop test last week.

The coming ExoMars mission comprises a life-hunting rover named Rosalind Franklin and a surface science platform called Kazachok, which are scheduled to launch next summer and touch down on the Red Planet in March 2021.

If the mission misses the 2020 launch window, it would have to wait until at least 2022 for its next opportunity to lift off. (Launch windows for Mars missions open just once every 26 months.)

The first such test took place last year. It involved the largest main parachute, which is 115 feet (35 meters) wide — bigger than any chute that's ever flown on a Mars mission. A helicopter dropped the chute from an altitude of 0.7 miles (1.2 kilometers), and the parachute successfully deployed and inflated, ESA officials said.

But two subsequent tests did not go so well.

"On May 28 this year, the deployment sequence of all four parachutes was tested for the first time from a height of 29 km [18 miles] — released from a stratospheric helium balloon," ESA officials wrote in the statement. "While the deployment mechanisms activated correctly, and the overall sequence was completed, both main parachute canopies suffered damage."

The ExoMars team made some changes to the parachute system's design before the next high-altitude test on Aug. 5, which focused just on the 115-foot-wide chute. The results were similar to the previous trial: the initial steps were completed correctly, but the chute suffered canopy damage before inflation. The test module ended up descending only under the drag of a small pilot chute, ESA officials said.

"It is disappointing that the precautionary design adaptations introduced following the anomalies of the last test have not helped us to pass the second test successfully, but as always we remain focused and are working to understand and correct the flaw in order to launch next year," ESA ExoMars team leader Francois Spoto said in the statement.

The team plans to conduct another high-altitude test of the big main parachute before the end of 2019. The next qualification attempt of the second main parachute is then anticipated for early 2020.

Trying to understand the problem

ESA and NASA experts convene regularly to exchange ideas about space science and technology. In addition to those forums, Mars parachute specialists will convene at a workshop next month in an attempt to fix the issues.

The coming ExoMars mission has a far more complex parachute decelerator system than those used for NASA's Mars missions.

Whether ExoMars is experiencing a parachute problem or other things associated with the parachute system is not clear.

And with time running short, ESA/NASA discussions can be muddled due to Technical Assistance Agreement (TAA) and International Traffic in Arms Regulations (ITAR) rules and regulations.

On the NASA side, the Mars Exploration Rover (MER) project — Spirit and Opportunity — went through similar nail-biting as parachute drop-testing at California's China Lake encountered problems. A chute redesign was needed, along with use of the National Full-Scale Aerodynamics Complex (NFAC) at NASA's Ames Research Center in Silicon Valley.

NASA’s mega-parachute for the Curiosity Mars rover mission underwent a total of six different tests between October 2007 and April 2009 within the NFAC. That parachute had 80 suspension lines, measured more than 165 feet (50 m) long, and opened to a diameter of nearly 51 feet (16 meters).

Spirit, Opportunity and Curiosity all landed safely on Mars. Curiosity touched down in August 2012, and Spirit and Opportunity landed a few weeks apart in January 2004.

The European-Russian ExoMars program consists of two phases. The first phase launched the Trace Gas Orbiter (TGO) and a landing demonstrator called Schiaparelli in March 2016. TGO reached Mars orbit safely, but Schiaparelli crashed during its landing attempt in October 2016 because of a data glitch.

Rosalind Franklin and Kazachok represent the second phase of ExoMars. Europe built the rover, while Russia is supplying the Kazachok lander.

NASA plans to launch a life-hunting rover to the Red Planet next summer as well. The Mars 2020 rover is based heavily off Curiosity and will employ the latter's descent system, which depended on parachutes and a rocket-powered sky crane.