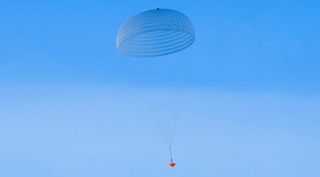 The 35-meter main parachute for the ExoMars 2020 lander in an earlier test. In a high-altitude test in May, two large parachutes suffered tears after deployment.
(Image: © ESA)

TITUSVILLE, Fla. — Development of a European-Russian Mars lander suffered a setback when the spacecraft’s parachutes malfunctioned in a recent test, but project officials said they still have time to correct the problem before its launch in a year.

In a June 28 statement, the European Space Agency said that two parachutes suffered "unexpected damage" during a high-altitude test a month earlier in Sweden of the system that will slow down the ExoMars 2020 lander.

The lander makes use of two main parachutes, each deployed with the assistance of a smaller pilot parachute. The first parachute, 15 meters in diameter, is deployed when the descending spacecraft is traveling at supersonic speeds in the thin Martian atmosphere. It is released and the second parachute, 35 meters across, is deployed once the spacecraft slows to subsonic speeds.

A May 28 test of the parachute system used a high-altitude balloon above the Swedish Space Corporation’s Esrange test site in northern Sweden. The test was intended to demonstrate the end-to-end performance of the entire system, including both the pilot and main chutes as well as the mortars used to extract the pilot chutes.

The other parts of the parachute system worked as expected, and ESA said "a good level of the expected aerodynamic drag was nevertheless achieved" despite the damage sustained by the parachutes. However, the agency acknowledged that the problem needs to be understood and corrected prior to the mission’s launch in one year.

Two additional tests of the parachute system are planned for later this year, but the agency didn’t state when those tests would take place and what the planned corrective actions would do to the schedule. "We are working harder than ever to keep on track for our launch window next year," Spoto said.

ExoMars 2020 features a Russian-built landing platform, called Kazachok, that will bring to the surface the European rover Rosalind Franklin. Kazachok arrived in Italy in March for payload integration activities with a separate European-built cruise stage, while technicians are installing instruments on the rover in the U.K. The integrated spacecraft will be shipped to Kazakhstan for launch on a Proton rocket in July 2020.

The spacecraft will land on Mars in March 2021, likely in a region of the planet called Oxia Planum. If that landing is successful, the solar-powered rover will then explore the surface, equipped with scientific instruments and a drill capable of sampling material up to two meters below the surface to look for evidence of life.

ExoMars 2020 is ESA’s second attempt to land a spacecraft on Mars. In October 2016, ESA’s Schiaparelli spacecraft attempted a landing on Mars to test entry, descent and landing technologies, but crashed into the surface. An investigation concluded that a software problem caused the lander to prematurely shut down its landing thrusters while still several kilometers above the surface.

A British-built lander, Beagle 2, was flown on ESA’s Mars Express mission, but was not heard from after landing in December 2003. Images of the landing site taken by NASA’s Mars Reconnaissance Orbiter more than a decade later suggest the spacecraft landed intact, but was unable to deploy all its solar panels or its communications antenna.

ESA currently has no Mars landers planned after 2020. The agency is considering participating in a NASA-led Mars sample return effort that will start with NASA’s Mars 2020 rover, which will cache samples for later return to Earth. ESA, in one concept, would provide a "fetch rover" on a later NASA lander that would collect the Mars 2020 samples and load them into a Mars ascent vehicle to place them into orbit. An ESA orbiter would then collect that sample canister and return it to Earth.