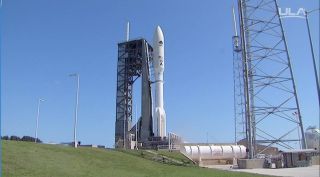 WASHINGTON — In keeping with a mandate from Congress, the Air Force on Friday officially renamed the Evolved Expendable Launch Vehicle program. It is now the National Security Space Launch program.

The 2019 National Defense Authorization Act directed the name change effective March 1. The 25-year-old EELV program was created long before the advent of reusable rockets. Congress in renaming the program noted that this is a new era when both reusable and expendable launch vehicles should be considered in future solicitations.

"The Secretary of Defense shall pursue a strategy that includes fully or partially reusable launch systems," the NDAA says. Congress also directs DoD to continue to work on a process to evaluate and certify launch vehicles using previously flown components or systems.

EELV dates back to August 1994 when President Clinton signed a National Space Transportation Policy and assigned responsibility for expendable launch vehicles to the DoD. The Air Force Space and Missile Systems Center started the EELV program to develop a family of launch vehicles for medium to heavy payloads.

The NSSL program is about making launch services "more agile and effective for the warfighter," said Col. Robert Bongiovi, director of the Air Force Space and Missile Systems Center's Launch Enterprise Directorate. In a statement, Bongiovi praised the EELV program for a "remarkable legacy" with 75 successful national security launches placing more than $50 billion worth of national security satellites on orbit.

The NSSL program will seek to leverage the U.S. commercial launch industry, which has grown significantly during the past five to seven years, said Bongiovi.

The EELV program is being relabeled just as the launch industry gears up for the next major competition for national security launches.

The Air Force Space and Missile Systems Center on Feb. 21 issued a draft request for proposals for EELV Phase 2 Launch Service Procurement. This is a high-stakes competition in which only two companies will be selected to provide launch services over a five-year period. According to sources, the two winners would split up to 25 launches over the five years.

The LSP competition is expected to include EELV incumbents United Launch Alliance and SpaceX, and also new players like Blue Origin and Northrop Grumman that are developing rockets partially with Air Force funding. For this competition ULA also will be introducing a new vehicle.

The Air Force has asked vendors for feedback on the Feb. 21 draft solicitation and is said to be prepared to release a final request for proposals by the end of March. Bids would be due 60 days after.

Industry sources who have reviewed the draft RFP pointed out that the Air Force in this solicitation emphasizes technical performance above anything else. Under the EELV program, one of the major criteria for selection is a launch vehicle's ability to carry national security payloads into nine reference orbits around the Earth.

Other evaluation criteria include management and business approach, past performance and price, to be prioritized in that order.

The Air Force describes the Phase 2 Launch Service Procurement as a "best value source selection." The first contract award will be given to the "offeror determined to be the best value to the government based on the source selection evaluation," says the draft RFP. The second winner will be selected to ensure the government has "the best portfolio of two launch providers."

The Air Force insists in the draft RFP that this competition will not be a straight price shootout. "While the government will strive for maximum objectivity in its evaluations, the source selection process, by its nature, is subjective, and, therefore, professional judgment is implicit throughout the entire process."

Officials have said the Air Force intends to select the two winners in 2020. That timeline has stirred speculation that the Air Force could end up choosing a launch vehicle that has not yet been certified to compete for national security launches. New rockets being developed by ULA, Blue Origin and Northrop Grumman might not be certified until at least 2020 or 2021. But launch vehicles that are not yet certified will still be able to compete in the Phase 2 LSP, sources said, as long as the companies submit a certification plan that has been validated by Air Force and Aerospace Corp. evaluators.