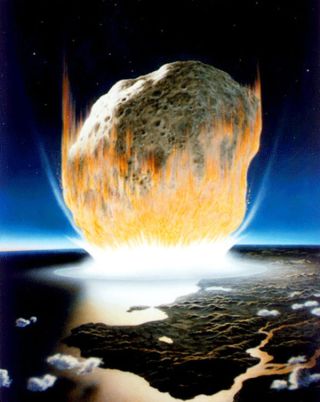 An artist's depiction of the asteroid impact that wiped out the dinosaurs.
(Image: © NASA/Don Davis)

The dinosaur-killing asteroid that hit the Earth around 66 million years ago probably generated a huge tsunami, according to new research.

A team of scientists dug into Chicxulub crater, which is the scar left over from the impact that is located on the Yucatan Peninsula in Mexico. There, they retrieved rocks from between 1,640 feet and 4,260 feet (500 meters and 1,300 meters) beneath the surface.

"This research helps answer the tantalizing question of exactly what happened in the immediate aftermath of one of the most significant events in Earth's history," co-author Kliti Grice, a geochemist at Curtin University in Australia, said in a statement. This impact was not only deadly to the dinosaurs, Grice noted, but it also killed off about three-quarters of all animal and plant species around the world.

Related: Chicxulub Asteroid Impact: The Dino-Killer That Scientists Laughed At

The researchers analyzed samples of the peak ring of the crater core, searching for molecules such as polycyclic aromatic hydrocarbons (PAH), which are organic compounds containing carbon and hydrogen. ("Aromatic" does not refer to the molecules' smell, but rather their ring-like shape.) In the samples, the scientists looked for a PAH called perylene, which comes from pigment made by wood-degrading fungi.

The compound's presence suggests that a tsunami several hundred feet (or meters) high "flooded the crater within days of the asteroid impact," Grice said. "The abundance of perylene within the crater is the result of it being transported there by the soil and land plant debris carried by the tsunami."

The aftermath of the impact was catastrophic: first, a quick inferno, then a long period of cooling. Most of the species alive at the time couldn't tolerate the dramatic temperature shifts and perished. "We fried them and then we froze them," lead author Sean Gulick, a geoscientist at the University of Texas as Austin, said in a statement. "Not all the dinosaurs died that day, but many dinosaurs did."

The research is described in a paper published on Monday (Sept. 9) in the journal Proceedings of the National Academy of Sciences.