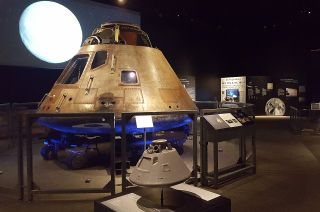 A sensory-assistive scale model of the Apollo 11 command module sits before the real "Columbia" as part of the "Destination Moon: The Apollo 11 Mission" exhibition at the Cincinnati Museum Center in Ohio, open to the public through February 2020.
(Image: © Smithsonian)

On its first, and previously only, visit to Ohio, the spacecraft that returned to Earth the first astronauts to land on the moon was welcomed by Neil Armstrong's parents. In September 1970, Viola and Stephen Armstrong attended the Apollo 11 command module's debut at the state fair in Columbus, as part of its NASA-organized 50-state tour.

Now, 49 years later, it was the first moonwalker's sons who had the honor.

Rick and Mark Armstrong were among the Cincinnati Museum Center's (CMC) special guests on Saturday (Sept. 28) for the ribbon cutting marking the opening of "Destination Moon: The Apollo 11 Mission," a Smithsonian traveling exhibition featuring their father's spacecraft. The fifth and last stop on a two-year tour, the command module "Columbia" and 20 other artifacts from the first lunar landing are now on display at CMC's Union Terminal through Feb. 17, 2020.

"I would like to invite everyone in 'Reds Country' to come out to Union Terminal and see 'Destination Moon,'" said Mark Armstrong, referring to the areas of fandom for Cincinnati's baseball team in Ohio, Kentucky, Indiana and West Virginia. "And please, please, bring your kids, because those young people need to see the incredible tools that enabled us to travel to the moon and get home safely."

Launched by the Smithsonian Institution Traveling Exhibition Service in October 2017 at Space Center Houston in Texas, the "Destination Moon" exhibit traveled to the Saint Louis Science Center in Missouri and Heinz History Center in Pittsburgh, Pennsylvania before spending this past summer's 50th anniversary of the Apollo 11 mission at The Museum of Flight in Seattle, Washington. Originally, the tour was to end there with the artifacts returning to the Smithsonian, but as a multi-year extensive renovation to the National Air and Space Museum drew on longer than planned, a fifth venue was added.

"I think it is most meaningful that Ohio is the final traveling destination for this exhibit before it finds its permanent home in the nation's Smithsonian Institution," said Joe Zeis, aerospace and defense advisor to Ohio Governor Mike DeWine. "This award of the Smithsonian's 'Destination Moon: The Apollo 11 Mission' exhibit really recognizes, I think, the kind of contributions of Ohio and Ohioans leading this nation into space."

Each of the prior venues used the exhibit, in part, to highlight the area's role in the exploration of space and the moon landing. For CMC, that connection is personal.

"We are so honored to welcome this exhibition to Cincinnati, a city that Neil Armstrong called home," said Elizabeth Pierce, president and CEO of the Museum Center. "He was a professor at the University of Cincinnati and an emeritus trustee at the Museum of Natural History and Science and he chose the Cincinnati Museum Center as home of one the moon rocks collected during the Apollo 11 mission."

"I think he would likewise approve of making the Cincinnati Museum Center the temporary home of the command module Columbia, the portion of the historic Apollo 11 spacecraft that brought he, Michael [Collins] and Buzz [Aldrin] home," said Pierce.

In addition to showcasing the capsule, "Destination Moon" features Aldrin's spacesuit helmet visor assembly and gloves worn on the surface of the moon and Collins' Omega Speedmaster chronograph used during the Apollo 11 mission. The exhibition chronicles the lead up to and execution of the first moon landing mission largely through the artifacts created by the effort.

The CMC, which in May opened a permanent Neil Armstrong Space Exploration Gallery and is currently hosting another lunar-themed Smithsonian exhibit, "A New Moon Rises" featuring photographs captured by NASA's Lunar Reconnaissance Orbiter, has augmented "Destination Moon" with displays of its own, as well as one noted item on loan, with a focus on inspiring the next generation of Ohioans to advance the area's aviation and space history.

"Maybe by taking your children to this museum in the next few months, you can ignite a spark — a spark that will change the course of their lives," said Mark Armstrong. "Maybe they will see the piece of the original Wright Flyer that flew in 1903 from Wilbur and Orville and Kitty Hawk that my brother and I have loaned to the museum. Maybe it is something else."

"Whatever ignites that spark, wouldn't it be wonderful if the future challenges in space were met by people right here in Cincinnati and the surrounding areas, people who decades from now could look back and say that they remember as a child that they visited the Cincinnati Museum Center with their mom or dad or grandparent to see 'Destination Moon' and for them, that is where it all started," said the astronaut's son.