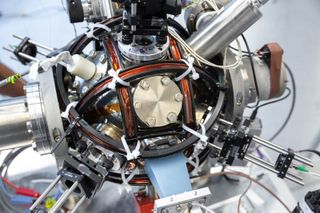 The atom interferometer tested whether there were extra forces acting on an atom.
(Image: © Imperial College London)

An experiment to seek out dark energy, or the so-called "fifth force," has come up empty-handed, casting doubt over some theories related to the mysterious cosmic matter.

Dark energy is believed to be responsible for the expansion of the universe, counteracting gravity, and is considered to be the fifth force acting on matter, after gravity, the electromagnetic force, and the strong and weak nuclear forces. And while dark energy makes up around 68% of the universe, the force still has scientists scratching their heads.

In the new experiment, scientists at Imperial College London and the University of Nottingham in the United Kingdom aimed to test the theory that dark energy is weaker when it is surrounded by other matter, such as planets, but stronger in a vacuum-like area, such as empty space. (That would mean dark energy operates opposite to how gravity works.) Using a tabletop setup in a London basement lab, the researchers placed a metal sphere the size of a marble and a single atom in a vacuum chamber to observe whether dark energy acts on single atoms.

If there had in fact been a fifth force acting between the atom and the metal sphere, then the atom would have deviated slightly as it got closer to the sphere, but the experiment failed to show that.

"This experiment, connecting atomic physics and cosmology, has allowed us to rule out a wide class of models that have been proposed to explain the nature of dark energy, and will enable us to constrain many more dark energy models," Edmund Copeland, a physics professor at the University of Nottingham's School of Physics and Astronomy and co-author of the study, said in a statement from Imperial College London.

The findings were published in the Physical Review Letters journal on Monday (Aug.19).