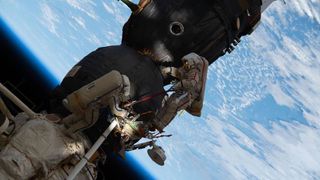 Two cosmonauts will perform a spacewalk outside the International Space Station today (May 29), and you can watch the orbital action live.

Russian spaceflyers Oleg Kononenko and Alexey Ovchinin are scheduled to venture outside the station at 11:44 a.m. EDT (1544 GMT), kicking off an extravehicular activity (EVA) that's expected to last 6.5 hours. You can watch it live here at Space.com, courtesy of NASA TV, or directly via the space agency. Coverage begins at 11:15 a.m. EDT (1515 GMT).

"Kononenko, who will be designated extravehicular crew member 1 (EV1), in the suit with red stripes, and Ovchinin, who will be EV2, in the suit with blue stripes, will install handrails on the Russian segment of the complex, retrieve science experiments from the Poisk module's hull, and conduct maintenance work," NASA officials wrote in a spacewalk preview.

"The spacewalk will be the 217th in support of station assembly, maintenance and upgrades and the fourth outside the station this year," they added.

Kononenko, who commands the station's current Expedition 59 mission, already has four spacewalks under his belt. Today's EVA will be the first spacewalk for Ovchinin, who will assume command of the orbiting lab next month after Kononenko returns to Earth.

Kononenko, NASA astronaut Anne McClain and David Saint-Jacques of the Canadian Space Agency will depart the station on June 24, ending their 6.5-month-long mission aboard the orbiting lab.