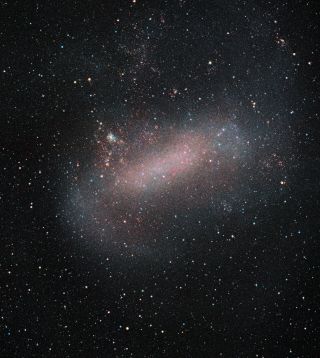 The Large Magellanic Cloud (LMC), one of the Milky Way's closest galactic neighbors, gets a close-up in this image from the European Southern Observatory's VISTA telescope at the Paranal Observatory in Chile.
(Image: © ESO/VISTA VMC)

Cosmic rays are tiny charged particles accelerated to nearly the speed of light through some of the most violent events in the universe. By themselves they're not too awful, but in big enough numbers they can start to wreak havoc on entire galaxies.

A team of researchers recently released simulations of the Large Magellanic Cloud (LMC) — a satellite galaxy of the Milky Way — and found that cosmic rays from a starburst event are starting to rip it apart. For now, thankfully, the LMC seems to be holding itself together.

Head in the clouds

Our Milky Way galaxy hosts a retinue of dozens of smaller satellite galaxies. The biggest are the LMC and the Small Magellanic Cloud. They got their name from Ferdinand Magellan; even though these two galaxies were known to stargazers in the southern hemisphere for millennia, Europeans became more familiar with them after detailed records taken after Magellan's famous world-girdling voyage, and so his name stuck.

Although it appears massive in the sky — over 20 times the width of the moon — the LMC sits about 160,000 light-years away from us. With a mass about 10 billion times that of the sun and a diameter of 14,000 light-years, it's the fourth-largest galaxy in our Local Group. The LMC currently orbits the Milky Way along with its sibling, the Small Magellanic Cloud, slowly spiraling inward as it does. In about 2.5 billion years, the LMC will finally reach our own galaxy, and the real fireworks will start then.

But the LMC is capable of some interesting bursts of star formation before that titanic collision billions of years from now. In addition to orbiting the Milky Way, it also orbits the Small Magellanic Cloud, and gravitational interactions between the two can trigger rounds of intense star formation, briefly lighting up the cloud before it settles back down again.

These rounds of intense star formation occur every few hundred million years, and whenever new stars are formed there will be an extra number of the highest-mass stars. These stars live their lives quickly, burning through their nuclear fuel in just a few million years before detonating in supernova explosions, some of the most powerful and energetic events in the known universe.

One of the many byproducts of this violence is the production of cosmic rays, tiny charged particles accelerated to nearly the speed of light. Cosmic rays constantly zip and zap through the cosmos, leaping over billions of light-years to wreak havoc wherever they land.

And according to a recent suite of simulations submitted to The Astrophysical Journal, the copious cosmic rays produced during the rounds of intense star formation in the past are trying to — for lack of a better term — blow up the LMC.

The trouble with cosmic rays is their kinetic energy. Even though they're individually miniscule, their ludicrous speeds mean they can pack a real wallop. And if you're just a random cloud of gas hanging out in the LMC, minding your own business and not bothering anyone else, an onslaught of cosmic rays can really ruin your day. One by one, interaction by interaction, the cosmic rays hit the molecules of the gas cloud, imparting some of their kinetic energy and heating up the gas.

Now much hotter, the gas isn't so interested in staying in the LMC — or, in other words, the gravity of the LMC isn't strong enough to hold on to its own gas after these rounds of concentrated star formation and supernovae. And so the hot gas tries to leave.

But not so fast. The researchers examined their simulations to see how far the hot gas, now loose and unbound from the LMC, could escape from their home galaxy. To study this, the researchers looked at the simulated behavior of something called the Magellanic Stream, a trail of hot, thin gas that wraps almost all around the Milky Way, a flow of material ejected from the Clouds hundreds of millions of years ago.

And the researchers found a surprise: even though the cosmic rays heated up the gas in the LMC, the gas stayed inside.

The reason for this apparent contradiction is the LMC's orientation as it falls toward the Milky Way. For the past billion years or so, it's been heading for us directly, no-holds-barred and face-on. Because of this orientation, as the LMC swims through the loose halo of gas surrounding the Milky Way, pressure from the gas can — temporarily — keep a lid on things.

So even though the LMC wants to eject a good fraction of gas, the small galaxy's belly flop into the Milky Way prevents it from escaping. At least for now. Eventually the ram pressure will ease, loosing the hot gas from the LMC and letting it spill into the stream behind it.

And as for the reason behind the existence of the stream itself, the researchers suspect it is caused more by gravitational interactions between the two Clouds than any effects of cosmic rays.

One thing is for sure: When it comes to the Large Magellanic Cloud, the next few billion years are going to be very interesting.