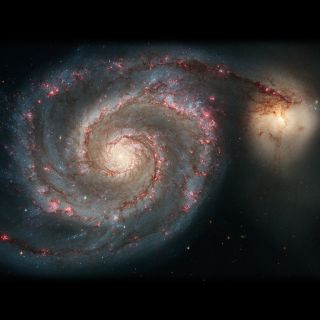 This Hubble Space Telescope image shows a merger between two galaxies — M51a, also known as the Whirlpool galaxy (left), and M51b — that are similar in mass to the Milky Way and the Large Magellanic Cloud.
(Image: © NASA, ESA, S. Beckwith (STScI), and the Hubble Heritage Team (STScI/AURA))

Our Milky Way galaxy will endure more than one dramatic collision in the foreseeable future, new research suggests.

You may be aware that the huge and beautiful spiral galaxy Andromeda will plow into the Milky Way about 5 billion years from now, livening up the night skies of any Earth creatures who are still around to look up. But one of our smaller galactic neighbors, the Large Magellanic Cloud (LMC), will actually hit the Milky Way about 2.5 billion years before the epic Andromeda event, according to a new study.

"The destruction of the Large Magellanic Cloud, as it is devoured by the Milky Way, will wreak havoc with our galaxy, waking up the black hole that lives at its center and turning our galaxy into an active galactic nucleus or quasar," lead author Marius Cautun, a postdoctoral fellow at the Institute for Computational Cosmology at Durham University in England, said in a statement. (That central supermassive black hole, known as Sagittarius A*, is about 4 million times more massive than the sun.)

"This phenomenon will generate powerful jets of high-energy radiation emanating from just outside the black hole," Cautun added.

But rest easy: These jets won't affect our solar system, he stressed. And while gravitational interactions spurred by the merger could fling us out into intergalactic space, the chances of this happening are slim, Cautun added. The distances between stars are so vast that even a galactic smashup probably won't jostle our solar system.

The LMC is a satellite of the Milky Way that lies about 163,000 light-years from our home spiral. Astronomers hadn't previously pegged the smaller galaxy as a compelling collision candidate, thinking instead that the fast-moving LMC would continue orbiting the Milky Way (MW) for eons or eventually escape and go on its merry way.

But recent observations suggest that the LMC has about twice as much dark matter as previously believed, significantly increasing estimates of its mass. (Dark matter is the mysterious stuff that outweighs "normal" matter by a factor of 6 to 1 throughout the universe.) And that has serious consequences for the future of that galaxy, and ours.

"Even though the LMC is currently heading away from the MW, dynamical friction acting on such a heavy galaxy will cause its orbit rapidly to lose energy and, approximately a billion years from now, to turn around and head towards the center, where it is destined to merge in another 1.5 billion years or so," the researchers wrote in the new paper, which was published online Friday (Jan. 4) in the journal Monthly Notices of the Royal Astronomical Society.

Unsurprisingly, the encounter will cause the Milky Way to pack on some pounds. Sagittarius A* will become up to eight times more massive, and the "halo" of stars on our galaxy's outskirts will increase in mass by a factor of five, according to the researchers' computer simulations.