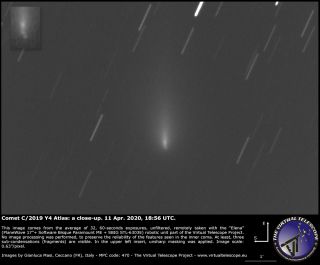 Just a month ago, it looked like the icy wanderer, officially known as C/2019 Y4 Atlas, might put on a dazzling sky show around the time of its closest approach to the sun, or perihelion, which occurs on May 31.

But relatively lackluster behavior soon dimmed such hopes. And optimism surrounding the comet is now pretty much extinguished, for it's no longer in one piece.

Comet Atlas "has shattered both its and our hearts," astrophysicist Gianluca Masi, the founder and director of the Virtual Telescope Project in Italy, said in an emailed statement on Sunday (April 12). "Its nucleus disintegrated, and last night I could see three, possibly four main fragments."

Masi posted online some of the photos he took, which clearly show the comet's splintered core.

Atlas was discovered in late December 2019 by the Asteroid Terrestrial-impact Last Alert System (ATLAS) in Hawaii, which explains the object's name.

From its detection date through mid-March, Comet Atlas ramped up dramatically, increasing in brightness by a factor of 27,500, according to Space.com skywatching columnist Joe Rao. As a result, professional and amateur astronomers alike began buzzing about its potential, some even daring to dream that Atlas might become the next great comet to brighten Earth's night skies.

But Atlas slammed on the brightness brakes on March 17, and it's now pretty clear why that happened.

Such breakups are common for comets, which spend most of their lives in the frigid depths of the outer solar system and court danger whenever they get close to the sun. Indeed, Atlas itself may be the result of a previous fragmentation event; comet expert John Bortle told Rao that Atlas may be a chunk that broke off the famous comet of 1844 (which is officially designated C/1844 Y1).

Whatever Atlas' past may be, its future will not fulfill our skywatching dreams. But the next great comet is out there somewhere, and it will eventually make an appearance.

Editor's note: If you have an amazing comet photo you'd like to share for a possible story or image gallery, you can send images and comments to spacephotos@futurenet.com.