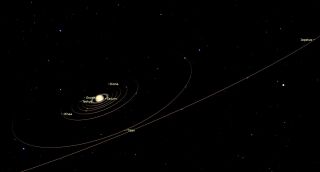 During July, Saturn will be well-positioned for observing all night while it moves retrograde (westward) through the stars of northeastern Sagittarius. Look for it as a medium-bright, yellowish object in the lower part of the southeastern sky, sitting east of the Milky Way. The ringed planet will reach opposition on July 9. On that night, Saturn will rise at sunset. Its minimum separation from Earth of 9.03 AU (839 million miles or 1.4 billion km) will cause Saturn to shine at a maximum brightness of magnitude +0.05 and exhibit an apparent disk diameter of 18.4 arc-seconds. The rings, which will narrow every year until the spring of 2025, will subtend 42.86 arc-seconds across. On July 15, the bright, nearly full moon will be positioned 2.5 degrees to the right (west) of Saturn.
(Image: © Starry Night)

July will be a great month to view the rings of Saturn. You can see them in any telescope that magnifies to at least 20 power, but the larger the aperture and the sharper the image, the more detail you can make out.

Tonight (July 9), Saturn is at opposition, when it lies on the opposite side of the sky from the sun. This is also when the planet's apparent size is greatest and it puts on an all-night performance with greatest gleam, shining at magnitude +0.1. Compared to the 21 brightest stars, Saturn would rank seventh, just a shade dimmer than similarly hued Capella in Auriga, the charioteer, and a trifle brighter than blue-white Rigel in Orion, the hunter.

Saturn will rise above the east-southeast horizon as the sun sets in the west-northwest. At around 1 a.m. local daylight time, the ringed planet will appear due south, about one-third of the way up from the horizon to the point directly overhead. And by the break of dawn, Saturn will be dropping down toward setting, low in the west-southwest.

Without a doubt, Saturn is the telescopic showpiece of the night sky, thanks to the icy, glimmering elegance of the planet's great rings. In small telescopes, these features surprise observers with a chilling beauty, even though it's anticipated.

Seen with the naked eye, Saturn now appears as a very bright, yellow-white star shining with a steady glow to the upper left of the star pattern popularly known as the "Teapot" in the constellation Sagittarius. The ring system that makes the planet both beautiful and spectacular cannot be seen unaided.

But any small telescope or large binoculars magnifying at more than 20 power will reveal the rings. They consist of billions of particles, of largely water ice, that range in size from microscopic specks to flying boulders miles across. Scientists believe that the planet's construction resembles that of Jupiter; it consists of either all gas or a small dense center surrounded by a layer of liquid and a deep atmosphere.

How to make a definitive ID

Here are two ways to make a positive identification of Saturn:

First find Jupiter. You can't miss it, shining like a brilliant silver "star" in the southern sky. Then, make a clenched fist and hold it out at arm's length. Now, measure off three fists to Jupiter's left, and the brightest starlike object that you find will be Saturn.

Or wait until Monday evening (July 15). Then, Saturn will appear to closely accompany the nearly full moon across the sky all through the night.

In ancient days, before we knew of the distant planets Uranus and Neptune, Saturn was presumed to be the farthest and slowest-moving known planet. Hence, it was named for the Roman god of time. Indeed, in mythology, Saturn was closely identified with the Greek god Cronus, but in other circles, he is usually recognized as the Roman god of agriculture. The name is derived from both the noun "satus" ("seed corn") and the verb "serere" ("to sow").

But why would the planet Saturn be linked to agriculture? Perhaps a clue can be gleaned from the ancient Assyrians, who referred to Saturn as "lubadsagush," which translates to "oldest of the old sheep." In all likelihood, this moniker came about because, compared with the other naked-eye planets, Saturn appears to move very slowly against the background stars, reminding some of the slow gait of plowing oxen or cattle.

Galileo Galilei (1564-1642) was the first to view the rings, which he did in 1610, although what he saw through his crude telescope left him befuddled. Saturn appeared not to have rings but rather handles on either side. These increased in size until they looked like two giant ears, then appeared like two smaller bodies flanking the planet on either side. Could Saturn actually be three celestial bodies instead of one?

Later, when the rings turned edgewise to Earth and the two mysterious companions disappeared, Galileo invoked an ancient myth, writing in his record book, "Has Saturn swallowed his children?" The scientist later lamented that his mind was too weak to comprehend this strange phenomenon. In truth, his crude telescope was too weak; a better instrument would have shown the ears as rings.

May I have a vowel, Christiaan?

It was not until the night of March 25, 1655, that a Dutch mathematician named Christiaan Huygens (1629-1695), using a much better telescope, finally saw the rings for what they were. To Huygens' eye, they appeared like a wide, flat ring, a sort of luminous hoop with Saturn floating in the center.

Another surprise greeted Huygens: a tiny star nearby, appearing like a small jewel. For days, Huygens studied Saturn, finally coming to the conclusion that the tiny star was a moon (which we know today as Titan). As for the ring, Huygens wanted to stake his claim for this other startling discovery. So he came up with an ingenious plan: He would continue his observations, but he would protect his discovery by publishing a mysterious code which he believed could prove his claim if necessary.

Translated into English, it reads, "It (Saturn) is girdled by a thin, flat ring, nowhere touching, inclined to the ecliptic."

Huygens simply assembled all of the letters from his Latin declaration into alphabetical order. Upon writing the sentence, all the letters would be used and none left over. The code helped ensure Huygens was credited with the discovery of both Saturn's ring and its largest and brightest moon. (The planet is now known to have a total of 62 moons, second in the solar system only to Jupiter's 79.)

And here is a final Saturn factoid: Since its density is about 30% less than that of water, Saturn would float — if you could find a bathtub large enough to drop it in! But it would still leave a ring.