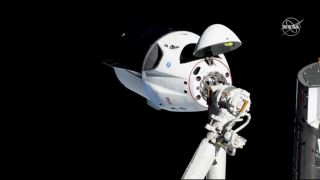 The Nevada-based company just announced that it has reserved up to four flights to the ISS aboard SpaceX's Crew Dragon capsule.

Bigelow Space Operations (BSO) intends to charge about $52 million per seat on these initial missions, which will last one to two months and carry up to four people apiece, company representatives said.

"The next big question is, when is this all going to happen? Once the SpaceX rocket and capsule are certified by NASA to fly people to the ISS, then this program can begin," Robert Bigelow, BSO president, wrote in a statement Tuesday (June 11), referring to SpaceX's workhorse Falcon 9 launcher.

"As you might imagine, as they say, 'the devil is in the details,' and there are many," he added. "But we are excited and optimistic that all of this can come together successfully, and BSO has skin in the game."

Bigelow did not disclose how much it cost to book the flights, saying only that "BSO paid substantial sums as deposits and reservation fees" back in September 2018.

NASA announced last Friday (June 7) that it's opening the ISS to greater commercial use. The increased opportunities include the accommodation of up to two private-astronaut missions per year.

These paying customers can fly aboard Crew Dragon or Boeing's CST-100 Starliner capsule, which is also in development.

Crew Dragon has one ISS mission under its belt already. In March, the capsule wrapped up a successful six-day uncrewed test flight known as Demo-1. That particular capsule was destroyed the next month during a ground-test accident, but SpaceX has several other Crew Dragons in production and aims to launch astronauts to the orbiting lab for the first time soon, perhaps even by the end of the year.

Boeing is targeting August for an uncrewed Starliner test mission to the ISS.

Paying customers have visited the orbiting lab before. From 2001 through 2009, seven space tourists made a total of eight journeys to the ISS aboard Russian Soyuz spacecraft, on trips booked via the American company Space Adventures. (American businessman Charles Simonyi went twice.)

Bigelow Space Operations is a subsidiary of Bigelow Aerospace, which is best-known for building expandable space habitats. One of these structures, the Bigelow Expandable Activity Module (BEAM), arrived at the ISS in 2016 and remains attached to the orbiting lab.