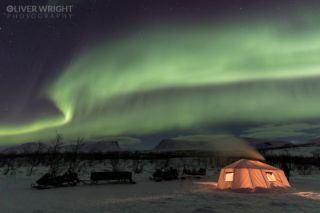 The northern lights glow over Abisko, Sweden in this view by photographer Oliver Wright taken on March 14, 2018.
(Image: © Oliver Wright)

A high-altitude version of the northern lights can create a headwind for some orbiting satellites, a new study reports.

The auroras help transport pockets of air higher up into Earth's atmosphere, increasing the drag on spacecraft that zip around Earth at relatively low altitudes, researchers in the new study said.

"We knew these satellites were hitting 'speed bumps,' or 'upwellings,' which cause them to slow down and drop in altitude," study lead author Marc Lessard, a physicist at the University of New Hampshire, said in a statement. "But on this mission, we were able to unlock some of the mystery around why this happens, by discovering that the bumps are much more complicated and structured."

Related: Northern Lights 2019: When, Where & How to See the Aurora Borealis

The mission Lessard referenced is Rocket Experiment for Neutral Upwelling 2 (RENU2), a brief suborbital flight that launched from Norway in December 2015.

The RENU2 rocket observed poleward-moving auroral forms (PMAFs), which are dimmer and less energetic than the "normal" northern lights that grace postcards and posters.

PMAFs are much higher up, too, occurring as far as 250 miles (400 kilometers) above the ground, compared to about 60 miles (100 km) for their more-familiar and picturesque cousins. PMAFs therefore transfer energy to the wispy air in the upper reaches of Earth's atmosphere, the study found.

And these "upwelling events" can complicate life for the satellites passing by in low Earth orbit.

"You can think of the satellites traveling through air pockets or bubbles [as being] similar to those in a lava lamp, as opposed to a smooth wave," Lessard said.

Earth's auroras result when charged particles from the sun slam into molecules in our planet's atmosphere. That excites these molecules to higher energy levels, and they emit light as a result. The color of that light depends on the molecule affected. Collisions involving oxygen generate yellow and green glows, for example, whereas nitrogen emits red, purple or blue when excited.

Earth's magnetic field funnels solar particles toward the planet's poles, which is why the auroras are usually confined to high latitudes. But strong solar activity can ramp auroras up, increasing their potency and extending their geographic reach. Such activity can also make PMAF upwelling events more substantial, the researchers said.

The new study was published last month in the journal Geophysical Research Letters.