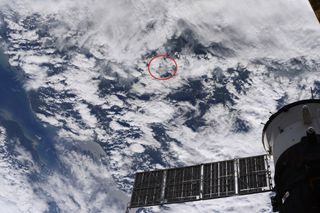 NASA astronaut Anne McClain tweeted on June 11 to mark the women's World Cup and share images of the stadium she snapped as the International Space Station orbited overhead.
(Image: © NASA)

Talk about nosebleed seats. A U.S. astronaut had the perfect view of the French stadium hosting the FIFA Women's World Cup — although the action may be a little bit hard to see from about 250 miles (400 kilometers) above Earth's surface.

"Finally made it to a @FIFAWWC in person," Anne McClain, a member of Expedition 59, tweeted on Tuesday (June 11), along with two pictures showing the cloudy view beneath the International Space Station. Red circles carefully mark Reims, France, the location of the epic match.

McClain added that she'll be watching the U.S. women's team defend their title from the space station — we presume using a computer or television, since even binoculars wouldn't pick up the action below. "Go #USA!" she added. (McClain was a member of the U.S. national rugby team before heading to space.)

Finally made it to a @FIFAWWC in person! We are watching and cheering on the @USWNT from @Space_Station – go #USA!📍Reims, France pic.twitter.com/eb8uP44QJlJune 11, 2019

The World Cup is often an occasion for space station crews to let loose on their usually busy schedules; crews are typically responsible for about 200 space experiments and the inevitable maintenance and repairs that come from living on an isolated laboratory.

Last year's men's World Cup was in Moscow, and the Russian cosmonauts on board the space station celebrated by playing microgravity soccer (or "football," as the Russians call it) near a large Russian flag. The cosmonauts festooned their play with kicks, spins and flips that even the top players on Earth can't do under the weight of gravity. Their soccer ball was the real deal — an official 2018 World Cup ball flown to space just for them.

An epic international match also took place aboard the space station in 2014, when the American and German astronauts on board faced off with a tiny soccer ball, scoring "goals" on each other across a couple of space station modules. The crew made a bet as to who would win that year's World Cup Germany vs. United States match; Germany ended up carrying the day.

"If the U.S. wins, these guys are going to draw a little U.S. flag on my head, but I think if Germany wins these guys should have to shave their heads," German astronaut Alexander Gerst said during an interview with ESPN prior to the match. "Either way, I'm looking forward to the game. It's going to be fun."

True to their word, the two U.S. astronauts did shave their locks on video a few days later, matching Gerst's already bald appearance.

"Our condolences on your loss today for Steve [Swanson] and Reid [Wiseman]," someone from NASA's Mission Control in Houston radioed up to the station before the shaving. "Flight wanted to point out that bald is more aerodynamic when flying."