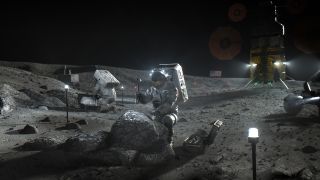 An artist's depiction of astronauts walking on the moon as part of NASA's Artemis program.
(Image: © NASA)

Last year, NASA set itself an ambitious goal: Send astronauts to walk on the moon in 2024. Now, the agency is busy planning what astronauts will do during those excursions.

NASA hasn't landed humans on another world in nearly 50 years, not since 1972's Apollo 17 mission to the moon. But that's the agency's goal for its Artemis program. So, the agency is combining that Apollo experience with what it has learned during decades of living and working on the International Space Station, and sprinkling in some challenges it wants to tackle in preparation for the next major exploration milestone, a human mission to Mars.

Science isn't the limiting factor, of course: Scientists have been itching to get back to the moon's surface for ages. But discussions surrounding the Artemis program have tended to focus on the challenges that need to be tackled before the first crewed landing in 2024 or on the agency's long-term vision for the moon, rather than on the practical details of taking advantage of early moonwalk opportunities.

In a series of presentations made last month, NASA personnel described some of the details of the agency's vision for a new era of moonwalks. In particular, representatives offered a sense of how extravehicular activities, or EVAs, during the first landed mission, Artemis 3 in 2024, could unfold.

First, the basics: During the mission, two astronauts will spend up to about 6.5 days on the lunar surface, Lindsay Aitchison, a spacesuit engineer at NASA, said during the Lunar Surface Science Virtual Workshop held on May 28.

That's nearly twice the duration of the longest astronaut stays during the Apollo missions. During that stay, the astronauts will conduct about four extravehicular activities, each of which could last about six hours, Aitchison said, matching the duration of typical excursions outside the International Space Station.

On the first crewed landing mission, astronauts will have to use their own two feet to get around the lunar surface. NASA isn't expecting to have a large rover on the surface and ready to assist exploration until the second crewed landing at the earliest. "We will be limited to just the crew and how far they can walk on their own two feet," Aitchison said. "That's still a fairly wide distance, but it is somewhat limited until we get to the further phases of exploration."

Given that constraint, Aitchison said, NASA has calculated that during each EVA, the crew should be able to cover about 10 miles (16 kilometers) round-trip. (For comparison, during their single milestone lunar excursion on Apollo 11, Neil Armstrong and Buzz Aldrin covered about 3,300 feet, or 1 km, in 2.5 hours.)

The astronauts' explorations will also be limited in terms of where their suits can keep them safe. The Apollo missions all landed in the equatorial region of the moon, but the Artemis missions will go someplace entirely new, the south pole region, where extremely cold temperatures may pose problems for spacesuits.

That's a calculated decision on NASA's part. The south pole is tantalizing because scientists have confirmed that water ice lurks frozen below the moon's surface in deep southern craters that never see direct sunlight. Would-be explorers hope that such ice could be mined and processed into drinking water or rocket fuel, facilitating more ambitious missions.

But the same conditions that would foster such ice would make direct exploration by astronauts difficult. The spacesuits on the first landed mission won't be able to withstand such cold temperatures, Jake Bleacher, a geologist and chief exploration scientist at NASA, confirmed during the same meeting. Even on subsequent missions, astronauts may still need to stay in warmer, sunlit areas and leave direct work in the permanently shadowed regions to robotic assistants.

The first Artemis spacesuit will be a model called the Exploration Extravehicular Mobility Unit, or xEMU, which is based on the EMU suits astronauts currently use during spacewalks on the International Space Station while incorporating some moon-specific lessons from the Apollo program.

"This is where we're going to test out technologies, utilize lessons learned from EMU and obviously Apollo, in order to get to 2024," Natalie Mary, an EVA systems engineer at NASA's Johnson Space Center in Houston, said during a Committee on Space Research meeting held virtually on May 20 focusing on human missions to Mars. "We do have some things that we are holding off [on] for sustained lunar [exploration]."

In particular, throughout the xEMU design process, spacesuit engineers have focused on fit and mobility in order to facilitate exploration. Unlike Apollo and space station suits, the xEMU suits emphasize lower-body movement, meant to ensure that astronauts can walk around the surface with relative ease.

However, the xEMU will be an evolving technology, and NASA already plans to make certain changes to support longer lunar stays for later Artemis missions, including beefing up the suit's protection against vicious moon dust. Later suits could also be programmed to verify their condition, rather than requiring precious astronaut time for a detailed inspection to ensure safety.

One of the components of the xEMU suits that NASA is most carefully analyzing is the gloves, Tamra George, a tools specialist at Johnson Space Center, said during the Lunar Surface Science Virtual Workshop.

"One of the biggest things that limits our designs of EVA instruments and tools is the gloved hand," George said.

Suit gloves must navigate a tricky balance, George said, since they need to be flexible to facilitate astronaut activities but also tough enough to keep astronauts isolated from the harsh lunar environment. And between the bulk of the gloves themselves and the pressure of the suit, space handiwork can be both difficult and draining.

And, of course, the lack of transportation on the lunar surface affects the kinds of instruments astronauts can bring on the moonwalks just as it limits the ground they can cover. Because astronauts on the Artemis 3 mission will need to carry their toolkits themselves, heavy or bulky equipment won't be an option until later missions.

Those constraints, plus moonwalk experience during the Apollo era, have led to NASA settling on an initial set of eight basic science instruments for astronauts to bring on these excursions, Adam Naids, a hardware development engineer at Johnson Space Center, said at the same meeting. Those tools include geology staples like a hammer, rake, scoop and tongs.

Of course, the Artemis 3 mission is still more than four years away, so NASA is still early in the planning process of every aspect of its spacewalks.

"The idea here was just to get us started on developing some of the tools that had a high probability of flying based on what was done in Apollo," Naids said. "This isn't meant to be an all-inclusive list. There's going to be dozens and dozens of other tools and equipment that's going to be made, but it got us started."