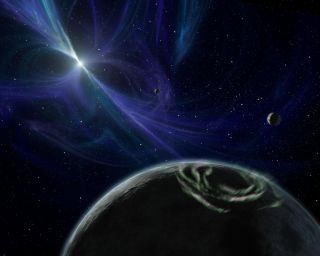 Three planets are known to orbit the pulsar PSR B1257+12, as depicted in this artist's illustration. In a new study, researchers suggest that a half-dozen other pulsar-circling planets might be made of exotic "strange matter."
(Image: © NASA/JPL-Caltech/R. Hurt (SSC))

Astronomers have identified about a half dozen exoplanets that may be made of an exotic matter known as “strange matter” unknown on Earth.

Scientists have created strange quarks through powerful collisions in particle accelerators, but these quarks quickly decayed into more stable particles. However, previous research suggested that strange quarks might prove stable within the superdense stellar corpses known as neutron stars.

Related: Inside a Neutron Star (Infographic)

Neutron stars are the remains of large stars that died in cataclysmic explosions known as supernovas, each cramming a mass about 1.3 to 2.5 times that of the sun into a city-size sphere about 12 miles (20 kilometers) across. Their name derives from their exotic composition: The powerful gravitational pull of these remnants crushes protons and electrons together to form neutrons.

In theory, at the extreme pressures found in the cores of especially heavy neutron stars, neutrons might break down into a soup of their component quarks. Prior work suggested that, given enough pressure, half of the neutrons' down quarks might transform into strange quarks, leading to strange quark stars made of strange matter.

Prior work also suggested that neutron stars and strange quark stars should have very similar average densities, said Jin-Jun Geng, an astrophysicist at Nanjing University in China and co-author of the new research that identified exoplanets possibly made of strange matter. This would make it difficult to distinguish them from one another and thus to see if strange quark stars are real.

"While a strange quark star is very similar to a neutron star, the difference between a strange planet and a normal planet is huge," Geng told Space.com.

The extraordinary density of strange planets means they can survive even if they come within 14.7 miles (23.7 km) of a strange quark star they are orbiting, virtually grazing its surface. In contrast, a normal planet's orbit can take it only as close as about 348,000 miles (560,000 km) before getting ripped apart by the dead star's gravitational pull, the researchers said.

Now, based on this feature of these strange worlds, scientists in China say they may have detected four good candidates for strange planets. These exoplanets revolve around pulsars — rapidly spinning neutron stars that appear to flash like lighthouse beacons from our perspective here on Earth — in orbits of about 348,000 miles (560,000 km) or less. The researchers also discovered two other planets that took only slightly longer to complete an orbit and therefore also might also be candidates for strange planets.

The researchers noted that strange planets might also orbit what appear to be white dwarfs — the remnants of normal stars that have burned all the hydrogen fuel in their cores — but are actually strange quark dwarfs. They found five exoplanets around white dwarfs orbiting suspiciously close to these stellar remnants, suggesting that they might also be strange planets.

However, the scientists cautioned that these potential strange planets might actually be white dwarfs, "which are also relatively compact objects that could be close-in to their host pulsars," Geng said.

But "the masses of our candidates are generally less than 10 Jupiter masses," Geng said. In contrast, white dwarfs generally range from about 150 to 1,200 times the mass of Jupiter.

"We believe that we have proposed a completely new method that could efficiently identify strange quark matter objects," Geng said.

The scientists detailed their findings online Aug. 29 in a paper submitted to The Astrophysical Journal.